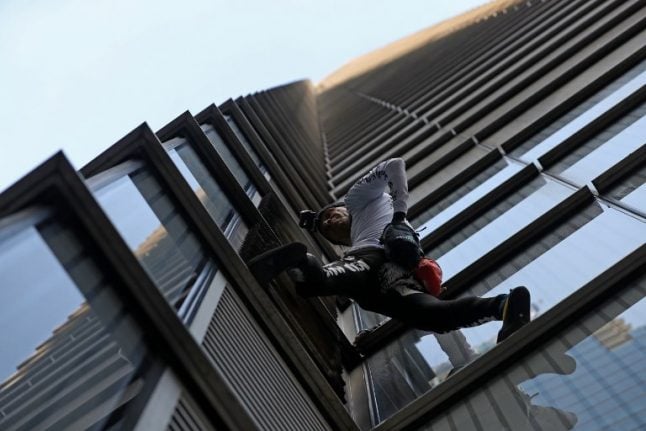 French urban freeclimber Alain Robert beginning his climb up Heron Tower. Photo: AFP
The 56-year-old so-called “French Spiderman” took around an hour to climb the 230-metre high tower without any ropes or harnesses, while traffic came to
a halt as bemused crowds formed below.
“This is what I love to do,” Robert told a handful of reporters at a nearby hotel shortly before beginning his ascent.
“I have pretty much dedicated my whole life to climb mountains, to climb cliffs, and now to climb buildings — but always 'free soloing', meaning I'm not using safety devices.”

Spot the human spider: Alain Robert has begun a surprise 760ft climb here in the City. He is scaling the Heron Tower, set to take about an hour. Police have closed down the surrounding streets; he is likely to be arrested #HeronTower #AlainRobert #HumanSpider #Spiderman pic.twitter.com/AOv13F9ez6

The maverick climber has scaled more than 100 structures without ropes or other safety equipment, setting a record for “most buildings climbed unassisted,” according to Guinness World Records.

Robert admitted he was “very nervous” ahead of Thursday's stunt, which he said was always the case before ascents.
“When I start climbing it's OK, because I know I'm going to be completely focused,” he added.
“But at this point of time I'm a little bit shaky.”

Always arrested
The Frenchman soon attracted hordes of mobile phone-wielding onlookers after starting the stunt at lunchtime from busy Bishopsgate on the southwestern side of the building.
Police arrived within minutes and cordoned off nearby roads, quickly clogging traffic in the City of London, the capital's square-mile financial centre.
“It's weird — that's my office,” said 36-year-old finance worker John Doherty, gazing up at Robert as he tackled the lower section of the mixed-use tower, home to offices, restaurants and a bar.

Off Alain Robert trots up the Heron Tower ? pic.twitter.com/JdUm2IKb8j

“I've just come back from lunch and it's a surprise.”
Nitin Kumar, 29, visiting London from Bangalore, India, was left amazed.
“It's just crazy. It's surprising to see somebody doing that.”

VIDEO: Alain Robert — aka #SpiderMan — begins his ascent of the #HeronBuilding, the tallest tower in the so-called “square mile” City of London pic.twitter.com/zi1a3nkzfJ

Robert threw his arms in the air in apparent jubilation after reaching the top before disappearing out of sight.
It was unclear if he was immediately arrested.

Prior to the stunt, he said he “definitely expected” to be detained — as had occurred after his six other climbs in the British capital.
“They always arrest me,” he added. “(In) '95 they were nice, and then after (it) started to get more complicated after 9/11 and everything.”
City of London police referred questions about the incident to their Twitter page, where they advised people “to avoid the area if possible.”