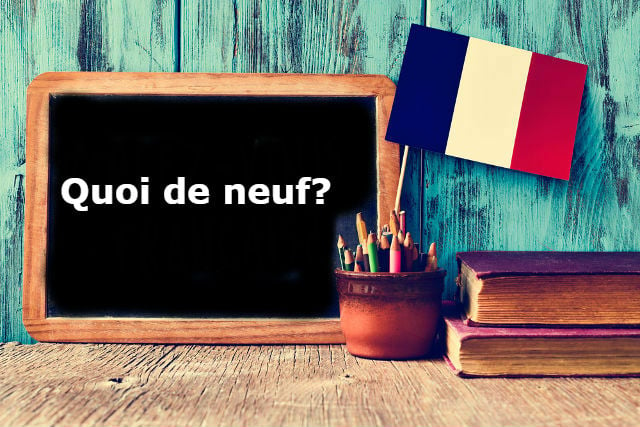 Photo: Depositphotos
Why do I need to know quoi de neuf?
Tired of saying ça va? a million times a day? Here’s a little expression to help you mix things up a bit.
What does quoi de neuf mean?
Piecing the words together might help you work out how to use Quoi de neuf (‘what of new’ — not 'what of nine' as you would be forgiven for thinking) because this informal greeting means ‘how are things?’ or ‘what’s new?’
But in conversations you’ll often hear it used between people that haven’t seen each other for a while and want an update on what the other person’s been doing.
Or could just as easily hear Salut! Quoi de neuf? from someone you saw recently as a casual way ask ‘How are you?’ at the beginning of a conversation.
You might also hear it used with the preposition de or à attached, for example Quoi de neuf de ton coté? (what’s new from your side?’) or Quoi de neuf à Paris? (How are things in Paris?)
So, how do you respond to quoi de neuf?
Well, that depends on who’s asking and what you want to tell them. If you have news to share then go ahead and do it.
Otherwise you can move the conversation along by replying rien de nouveau (‘nothing new’), rien de special (‘nothing special’) or simply pas grand chose (‘not much.’)
Finally, it’s always polite to ask a question in return, so don’t forget to add Et toi, ça-va? (‘and how are you?’) at the end.
How can I use quoi de neuf?
Ça va? – Oui ,ça va. Et toi, quoi de neuf? – How are you? – Fine, thanks. How are things with you?
Salut, quoi de neuf? – Pas grand chose. Tout est vieux. – Hey, what’s new. – Not much. Same old, same old.
READ ALSO:
For more French Expressions and French Words of the Day you can CLICK HERE to see our full list