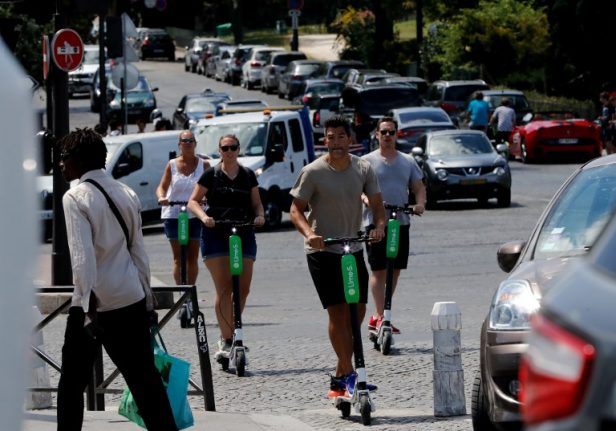 Nifty but naughty: that’s perhaps the most objective way of describing electric scooters and their riders, as this latest means of urban transport has in recent months taken over the sidewalks of Paris and other cities in France, to the detriment of concerned pedestrians.

Electric scooters, known as trottinettes électriques in French, can reach speeds of up to 40km/h and their circulation has up to now been unregulated in France, meaning that users can ride around as they please on the road or pavement without facing any potential fines for their recklessness.

The trend hasn’t gone unnoticed in France’s National Assembly, with the country’s Minister of Transport Elisabeth Borne announcing on Tuesday that the government wants to create a “new vehicle category” in France’s Highway Code in the coming weeks to regulate the mobility of these scooters.

“We can’t allow these machines that travel at 20 or 30 km/h to put the lives of pedestrians walking on the pavement at risk,” Borne argued, adding that the planned measure would guarantee “the safety of both pedestrians and scooter users”. “We are going to create a new category of vehicles in the Highway Code to allow electric scooters to be ridden on bike lanes or in 30 km/h zones, but their place is not on the sidewalks”.

Borne also explained how local mayors and authorities would have a say on how the new transport rules were implemented in each of their cities.

There will also be a new ministerial role in the National Assembly – Minister in charge of Transport and Scooters – in order to guarantee the regulation of this new unwieldy means of transport described in the French press as “anarchic”.

A number of accidents involving pedestrians being knocked over and injured by careless scooter riders have been reported in the French press, including one where a 92-year-old man had to be rushed to hospital.

According to a report by Le Parisien based on official French road safety data, there were 284 people injured and five killed in scooter and rollerblade-related accidents in 2017, an increase of 23 percent compared to the previous year.

The regulatory vagueness surrounding the use of helmets and other protective gear by trottinette users has also resulted in some serious accidents for the riders themselves, even when driving at speeds of just 20km/h. In recent months two US scooter operators, Lime (UBER.UL) and Bird, have rolled out thousands of electric scooters in the French capital. There are also two Chinese dockless bicycle sharing schemes competing with them as well as the problem-ridden Velib bike scheme.

Sales of electric scooters in France have also boomed in the past two years (100,000 electric scooters were sold in 2017 according to the French Micro Mobility Federation), becoming one of the preferred means of transport for commuters heading from the suburbs to work in the city centre.

These lightweight vehicles have so far been allowed on Paris's metro and train carriages.