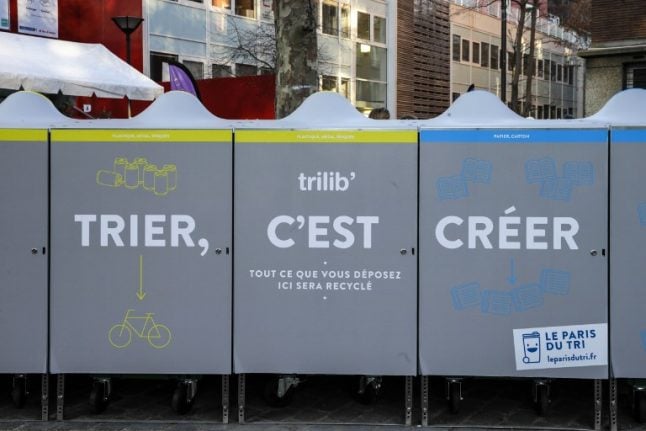 Photo: AFP
The French capital may have recycling bins – but they’re not visible on every street, and often the side-by-side garbage baskets, meant to separate waste from recyclable materials, just wind up being receptacles for non-recycle goods, mixed with bottles, cans and paper.
Similarly, restaurants in the capital are legally required to recycle since the government issued an ordinance in 2016. But this week, environmental NGO Zero Waste France filed a complaint against two restaurants, McDonald’s and KFC in Republique, for failing to recycle their waste.
According to the NGO, only 76 out of 1,500 McDonald’s restaurants in France have implemented these recycling measures.
France’s lack of organisation when it comes to recycling is reflected in the statistics: the country recycles just 25 percent of all its waste, and just 22 percent of its plastic packaging, putting it 25th out of 30 European states when it comes to recycling, according to AFP. Photo: AFP
Plastic waste recovery in France is a bit higher, according to PlasticsEurope (a pan-European association representing plastics manufacturers active in the European plastics industry), with France coming 15th out of 30 European countries. This recovery includes both recycling, and energy recovered from incineration.
Outside of Paris, some people are frustrated by the lack of availability of recycling bins and the haphazard nature of local recycling guidelines.
“There’s no recycling bins for houses, and we have to take stuff to the big bins around town,” Bev Lambert said.
Tony Jones also bemoaned the poor availability of recycling bins at his apartment complex.
“Our building only has yellow ‘emballage’ and rubbish,” he said. “We have to take bottles and paper elsewhere.”
Elisabeth Jones added, “And we cannot recycle food waste to compost either!”
However, others are impressed with their local government’s approach to recycling and find it an improvement over their home communities.
“From an American perspective, I’m delighted with France,” E. Skye Gravenstuk said. “I come from an area that was almost impossible to recycle in until recently. Here in France, I’m not at all bothered by collecting my recyclables until the end of the week and sorting them at the bins.” Photo: AFP
She said the majority of people in her town have incorporated recycling into their lives, and would never consider binning recyclable materials.
Chris Phillips, originally from Gloucester (England), is also impressed with the French recycling system.
“I find the recycling bins/facilities in my local village accept a wider range of material than in England, and I swing by with my plastics/paper/glass/metal every time I nip into town,” he said.
Patricia Nicole von Regensburg is very happy with how her town in Pyrénées-Atlantiques handles recycling.
“Most things can be recycled and you can have the big yellow recycling bins at your house,” she said. “There are often awareness campaigns around town.”
Judith Kilshaw, in Bouche du Rhône, thinks her municipality does “pretty well”.
“We were provided with a composter for the garden and household waste. We get sent a very comprehensive list of recycling do’s and don’ts every year, and in addition have black bags collected twice a week and yellow recycling bags collected once a week.”
Though Bouche du Rhône may encourage composting, France still remains behind in terms of recycling household waste, a representative from Zero Waste France said. Photo: AFP
“Sorting and composting of organic waste is only offered in certain areas,” Zero Waste campaign manager Laura Chatel said, pointing out that organic waste constitutes one-third of all household waste.
Other types of recycling, including that of aluminium cans, are not clearly explained for household users, and as a result recycling rates of these substances are low.
France is making an effort to improve recycling rates in order to meet EU regulations, which stipulate that 100 percent of all plastics and 55 percent of all waste must be recycled by 2025.
A French law passed in March 2016 now says all French businesses, offices and administration must recycle waste.
For Zero Waste, policies must go a step further, and develop programmes to recycle organic waste.
“The most effective lever at the moment is undoubtedly to develop source separation for organic waste,” Chatel said.
“This requires equipping French households with a third waste bin dedicated to this organic waste.”
Changing shopping habits is also critical, she added.
“Priority must be given to reducing waste at the source by cutting single-use products, using reusable packaging, and (manufacturers) extending the life of products,” Chatel said.
“Not all waste is recyclable and the recycling process itself consumes resources like water and energy, so the best waste is still one that is not produced.”
By Jax Jacobsen