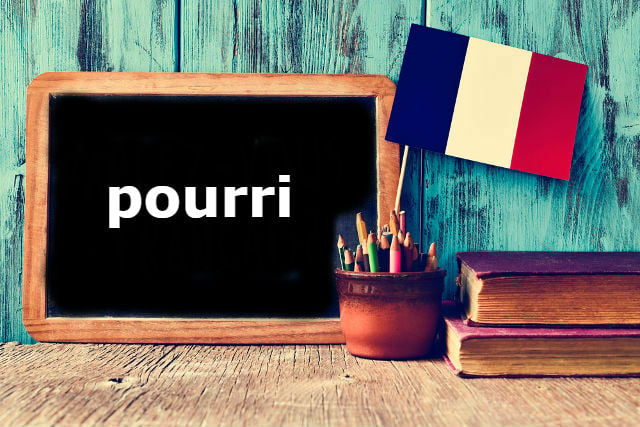 Why should I learn pourri?

Pourri is a need-to-know word for describing bad apples of all kinds, as well as things you don’t like.

Translated directly pourri means ‘gone off’ or ‘rotten’ and is often used to describe food, for example if a market holder was trying you persuade you to buy some rotten tomatoes you could say: Non merci, ces tomates sont pourries! (‘No thanks, these tomatoes are rotten!’).

Pourri is an adjective and as the tomatoes in the case above are feminine and plural, you add an –es to the end of the word.

Building on this meaning, pourri can also be used to describe a rotten person such as a ‘crook’, ‘bad apple’ or someone who is corrupt. You might hear someone say, Les hommes politiques sont souvent des pourris. (‘Politicians are often crooks.’)

In extreme cases you might even hear someone described as pourri jusqu’à la moelle, or ‘rotten to the core’.

Finally, in familiar spoken French pourri is often used as a general way to say something is ‘rubbish’ or ‘lousy’. You could use it to describe pretty much anything from a film (Le film est pourri – ‘The film is rubbish’) to the weather (Quel temps pourri! – ‘What terrible weather!’) or even an accent (il a un accent pourri – ‘His accent is lousy.’)

(The above examples come from wordreference.com) FRENCH WORD OF THE DAY
French Expression of the Day: Faire son cinéma

Why do I need to know faire son cinéma?

Because you might be running out of words to describe your child’s latest meltdown.

Faire son cinéma – usually pronounced something like fair sohn sin-ay-mah – translates literally to ‘to make one’s theatre,’ but in practice the expression is not about opening your own movie theatre. It is actually used to describe overly dramatic or excessive behaviour, and the best colloquial translation in English would be ‘to make a scene.’

You will likely hear this phrase in French in a particular context – when a parent is chastising their misbehaving child who is likely throwing a temper tantrum. But the expression is not limited to overly tired three year olds – it can also be used to describe melodramatic adults, or people simply hamming it up, as we might say in English.

The origins of the expression are what you might expect – as actors are known for their exaggerated gestures and simulations, around the mid-20th century, this idea of exaggerated performance became an expression used for anyone (not just those paid for it). There is another similar French expression: Faire tout un cinéma, which translates to ‘making a big deal of something,’ and though similar, it is more so focused on the idea of exaggerating to amuse an audience.

La femme à côté de moi a vraiment fait son cinéma. Elle était tellement énervée que son hamburger était froid qu’elle a crié sur le serveur. – The woman next to me really made a scene. She was so upset her burger was cold that she screamed at the server.

FRENCH WORD OF THE DAY
French Expression of the Day: Faire trempette
Url copied to clipboard!