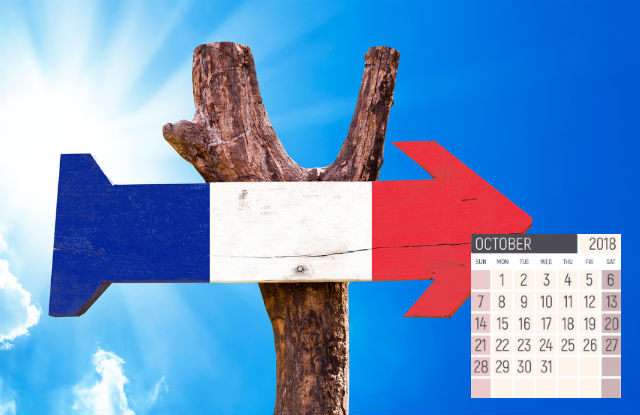 French President Emmanuel Macron is in the town of Trèbes — one of the worst affected by the recent floods in south west France.

While there he will see the damage wreaked by the deadly floods, meet the rescue services and the local authorities.

Hollywood legend and stage veteran Al Pacino will give two solo performances on Monday and Tuesday in Paris, recounting highlights from his decades of acting along with more intimate exchanges with the audience. French MPs are set to vote on the first part of the 2019 budget.

The process, which is set to last until Christmas, will see MPs begin by looking at the part of the budget dealing with taxes, and the debates are expected to be tense.

An auction of Banksy's silkscreen prints is set to take place in the French capital on Wednesday.

All eyes are on the next sale of works by the elusive street artist after the recent auction of his art in London saw his spray-painted canvas “Girl With Balloon” run through a shredder embedded in the frame moments after it was sold for $1.4 million.

Cult film ET will be showing at Paris' Grand Rex cinema along with a live orchestra playing the score.

President Macron is set to head to Slovakia and the Czech Republic as part of his tour of countries in the European Union.

Both countries are members of the Visegrad Group, a cultural and political alliance of four Central European states, along with Hungary and Poland, who have all taken hostile positions hostile towards accepting migrants into the EU.

The Academie Francaise is set to hand out its prestigious Grand Prix literary award. The French court of appeal is set to rule on the case of Hassan Diab — the Ottawa academic accused of a 1980 bombing in Paris.
France had appealed a January decision to release Diab and send him home to Ottawa and postponed the new ruling due to the appearance of new evidence from the Greek authorities.
Friday will also see the start of Paris Games Week when visitors get to test video games ahead of release and meet industry influencers.
The event will last until October 30th. Photo: AFP
Saturday Oct 27th
President Macron is set to head to Istanbul, Turkey for the summit on Syria with Russian President Vladimir Putin, President of Turkey Recep Tayyip Erdoğan and German Chancellor Angela Merkel.
La Fête du Piment, Espelette (south west France), October 27th & 28th
You can tell it's autumn when there are so many food related festivals and one place you won't struggle to find spicy food in France is in Esplette during the Fête du Piment.
Join up to 20 000 visitors to celebrate the local chili pepper harvest and enjoy some Basque cuisine while you're in town. Other attractions include concert, markets (where you can stock up on chilli peppers) and the blessing of the chilli peppers, which takes place at the end of a traditional Basque mass ceremony.