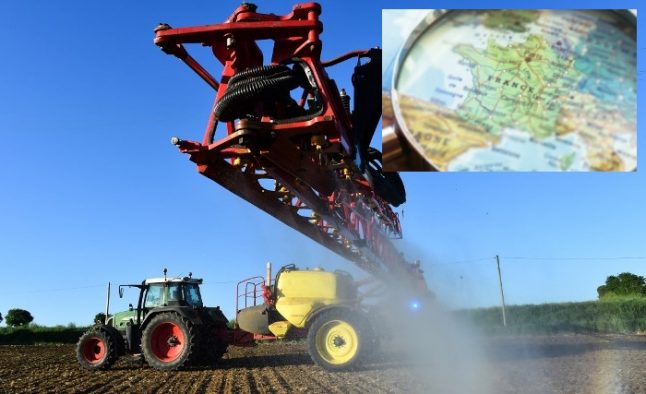 Sixty-one farmers and several residents of the Maine-et-Loire department of central-west France have experienced a form of intoxication likened to a “tear gas attack” caused by a powerful batch of metam sodium.

Firefighters and emergency services rushed to the small commune of Brain-sur-l'Authion to tend to the sick, rushing them to the nearby Angers University Hospital.

One local farmer is thought to have unwittingly sprayed too much of the potent pesticide on his land, which once airborne spread across all the nearby fields and caused residents to experience a severe stinging feeling in their eyes and throats. If you’re contemplating having kids anytime soon, here’s a news story that may make you think twice about it.

A 14-year-old girl who ran away from her parents’ home in the southwestern French city of Pau has been found by her elders several weeks after she went missing.

It was no mean feat for the troublesome teenager’s concerned mum and dad, as she was located 778 kilometres from her hometown, in a prison in the Paris suburb of Fleury-Mérogis.

The problematic minor had been put behind bars after carrying out a violent robbery in the French capital and had actually given authorities a fake name when placed under arrest. Outrage as animal abuser chucks kittens out of speeding car

A vet from the southwestern department of Charente has shared the chilling story of how a local resident brought an injured kitten to his clinic, after she reportedly saw a number of baby cats being thrown out of the window of a speeding car.

“Human cruelty is limitless … my stomach is turning,” wrote the vet in a Facebook post shared over 2,000 times in which she described the woman’s account of how all but one kitten was crushed to death by passing lorries on the RN 10 near Angoulême.

The Good Samaritan has been praised by the medical professional and the public alike after she put her life in danger, crossing a busy road to save the injured animal. Tragically, the vet wasn't able to save the injured kitten as it succumbed to its injuries overnight.

The town of Roubaix near the northern French city of Lille isn’t on most tourists’ itineraries but the reopening of its revamped art deco La Piscine Museum on Saturday is set to draw thousands more visitors than it did when it first came to be in 2001. Already named France’s best museum outside Paris by Le Journal des Arts, the €9million refurbishment will no doubt make even more waves, as aside from the exquisite collection held at the wonderfully preserved 1920 indoor swimming pool which makes it so unique, there is now the neighbouring mill factory that has been restored and including dozens more chef d’oeuvres. It’s definitely worth a visit if you’re in France Nord region, if just to help breathe new life into a town where 40 percent of the 96,000 residents live below the poverty line.

Hardline Italian deputy prime minister Matteo Salvini has upped the ante in the Alpes after Friday’s reports that a French police van was seen last Friday driving into Italy to return recently-arrived migrants to the town of Claviere, 80 km from Turin

Salvini has sent police reinforcements to the tiny Alpine town to stop France dropping off any more asylum seekers back over the border.

“Does Paris, which claims to be civil, find it normal to throw people into the woods?,” he wrote on a Facebook post.

“Enough of being taken for a ride, Italy demands an explanation, Macron must answer!”.