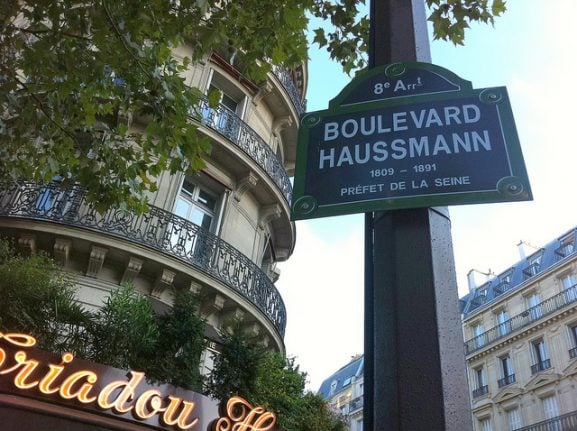 Photo: Paris-Sharing/Flickr
While most people might have an idea who Place Charles de Gaulle or Edith Piaf are named after, there are plenty lesser-known but equally influential figures honoured in the city’s street names.
From politicians, to scientists, thinkers, writers and inventors, let The Local shed some light on who some of Paris’ most beaten paths are named after.
Rue de Richelieu
Running from the 1st to 2nd arrondissement this street used to be home to coin dealers and currency exchanges. It’s named after Cardinal Richelieu (1585 – 1642) who served as Louis XIII’s chief minister.
READ ALSO:
Photo: Olivier Bacquet/Flickr
Rue Étienne Marcel
Now well-known for being a shopping mecca, Rue Étienne Marcel, in the 1st and 2nd, got its name from a government official (Étienne Marcel, approx. 1302 – 1358) who negotiated with kings to bring in governmental reforms and increased state powers.
Photo: Jeanne Menjoulet/Flickr
Rue Réaumur
Rue Réaumur, in the 2nd and 3rd, commemorates scientist René-Antoine Ferchault de Réaumur (1683 – 1757) famous for his studies in geometry, thermometers and insects.
Boulevard Raspail
Connecting the 6th and 14th arrondissements, this grand boulevard honours scientist and socialist politician Raspail (1794 – 1878), who was imprisoned for being president of the human rights society.
While in prison he treated other prisoners for their diseases and became an early advocate of germ theory, promoting antiseptics, sanitation and a healthy diet.
Quai Anatole France
Sandwiched between the Musée d’Orsay and the Seine in the 7th arrondossement, this busy road is named after writer, literary critic and Nobel Prize winner, Anatole France (1844 – 1924).
READ ALSO:
Image: India Amos/Flickr
Boulevard Haussmann
Appropriately there are plenty of examples of classic Parisian Haussmann-style buildings on this long boulevard running between the 8th and 9th arrondissements.
The man behind them Georges-Eugène Haussmann (1809 – 1891) was commissioned by Napoleon III to renovate Paris, the results of which are many of the parks, boulevards and pervasive style of architecture that the city is still known for today.
Photo: Paris-Sharing/Flickr
Rue la Fayette
Rue la Fayette spans two arrondissements (the 9th and 10th) and commemorates the “hero of two worlds”, a French military officer Gilbert du Motier de La Fayette (1757 – 1834) who commanded US troops in the American war of independence and later became a leading figure in the French Revolution.
Boulevard Voltaire
Cutting diagonally through the 11th this street name honours outspoken writer François-Marie Arouet, known by his nom de plume Voltaire (1694 – 1778), whose works embody the principles of the French Enlightenment; individual freedom and religious tolerance. Voltaire. Photo: Kanijoman/Flickr
Rue Vercingétorix
Running almost the full length of the 14th arrondissement, this street is named for an Auvergnese folk hero, who united the Gauls to fight against Roman invasion.
When the fight was ultimately unsuccessful, Vercingétorix (approx. 80 BC – approx. 46 BC) handed himself over to the Romans in order to save as many of his men as possible.
Quai André Citroën
It might not be the most beautiful of Paris streets but it seems appropriate that the 15th’s Quai André Citroën, named after the vehicle manufacturer (1878 – 1935), is always choc full of cars.
READ ALSO:
André Citroën. Photo: AFP
Boulevard Pasteur
Louis Pasteur (1822 – 1895) was a scientist who, along with creating a vaccination for rabies, also pioneered the process of heating foods to eliminate bacteria, otherwise life known as pasteurization and extend shelf life. Boulevard Pasteur is in the 15th.
Avenue Félix Faure
This calm and quiet street in the 15th gets its name from a former French president Félix Faure  who was in office from 1895 – 1899.
Faure died in a rather unusual way, suddenly and from apoplexy in the Élysée Palace while engaged in sexual activities in his office with 30-year-old Marguerite Steinheil.
Felix Faure. Photo: Maya-Anaïs Yataghène/Flickr
Avenue Victor Hugo
The famous writer Victor Hugo (1802 – 1885) who penned Les Misérables and The Hunchback of Notre-Dame has streets named after him throughout France. In Paris, Avenue Victor Hugo is in the 16th arrondissement.
Avenue Foch
In 1929 the wide avenue between the Bois de Bologne and the Arc du Triomphe in the 16th was renamed Avenue Foch after the WWI general and military strategist Ferdinand Foch (1851 – 1929), who died in the same year.
During the WWII occupation of Paris, the Gestapo headquarters were located on the street earning it the nickname “Avenue Boche.”
Quai Louis Blériot
Next to the Seine in the 16th, Quai Louis Blériot is named after an aviator and engineer Louis Blérot (1872 – 1936) who invented the headlamp for cars and made the first airplane flight across the English Channel.
Louis Blériot. Photo: AFP
Rue Guy Môquet
Militant communist Guy Môquet (1924 – 1941) became a symbol of the French resistance after he died at the hands of the Nazis. He lived close by to the street now named after him in the 17th.
Place Jules Joffrin
Jules Joffrin (1846 – 1890) was a radical socialist politician who was exiled in Britain for 11 years before ultimately serving as vice president. Place Jules Joffrin is in the 18th.
Place Jules Joffrin. Photo: smily19652000/Flickr
Avenue Jean Jaurès
Somewhat unremarkable Avenue Jean Jaurès in the 19th doesn’t give much indication of the high ideals of its namesake. Socialist Jean Jaurès (1859 – 1914) famously opposed French involvement in the First World War, and was ultimately assassinated for his pacifist views in a café on Rue Montmartre.
Avenue Gambetta
Léon Gambetta (1838 – 18882) was a politician who was a key figure in the third republic famous for being a great orator and fierce defender of the lower classes. Avenue Gambetta is in the 20th arrondissement.
by Joanna York