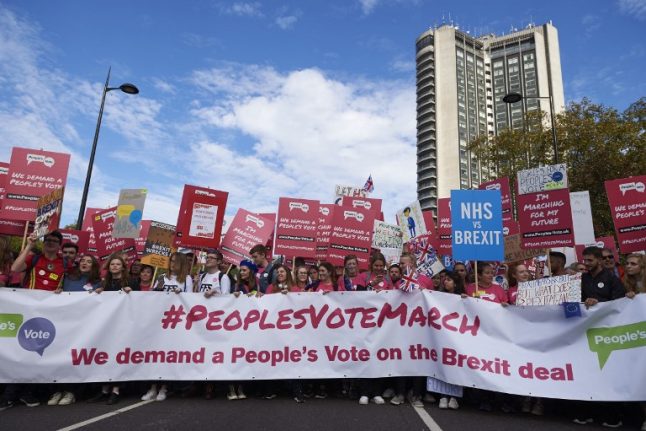 This Saturday, at least 200 Brits from France will be in London, joining hundreds of other British in Europe from across the EU27 and EU citizens living in the UK – plus (hopefully!) hundreds of thousands of others – at the People’s Vote March for the Future.

It’s a big ask for a Brit living in Europe to fly or drive across the Channel just for a few hours’ manif,  especially when for many of us it’s the third or even fourth time we’ve done it since June 2016. It takes time, it takes commitment, and it takes money.

So why are we doing it again? Simple. Because we can’t and won’t stay sitting down and silent when Brexit still threatens to remove some of our rights.

The march on 20 October is – like its predecessor in June – all about demanding a People’s Vote on Brexit: on the terms of any deal, and on whether the UK should simply remain in the EU instead (hmm – bit of a no-brainer for us, that one!).

But this time those of us travelling from France and elsewhere in the EU have another agenda too: we are coming together in a public show of solidarity with our friends the EU citizens who live in the UK.

The campaign and advocacy group British in Europe has worked hand in hand with our counterpart “the3million” for two years now, and our friendship and collaboration has been one of the few positives to come out of Brexit. We’ll be meeting and marching together as The 5 Million to celebrate that friendship as well as our shared European-ness.

If you’re watching the march on TV, look for a sea of white amongst the widespread blue and yellow … that’ll be us!

There is a more serious side too, of course: EU citizens living in the UK couldn’t vote in the referendum unless they were already British citizens, just as more than 60% of the estimated 4.9 million British people living abroad were barred from voting by the 15 year rule.

And that means that even if there is a People’s Vote it would need a change in the franchise for most of us to be able to take part.

Yet Brexit will fundamentally challenge the terms on which we currently living our lives. So we at British in Europe, alongside the3million, Final Say for All and EU Citizens' Champions, are marching to demand a place for EU citizens in the UK and British citizens in the EU in any People’s Vote.

We are the people too. In fact together, we are 5 million people, and every one of us is 'one of the five million'.

Every one of us marching in London on Saturday takes with us in spirit another few hundred people who can’t be there in person. We’ll be there for all of you – please support us. Read on to find out how. Two events are being organised in France on Saturday 20 October by members of the campaign group Remain in France Together, one in Toulouse and another in Limoges. These are not marches or protests, but gatherings in solidarity with the London march. If you can get to either of these cities, please join in!

Toulouse, Capitol, from 11am until 2pm. Organiser Julie Hall says “In solidarity with the March for the People’s vote, we’ll be there to highlight the consequences of no vote. 350,000 French citizens living and working in the U.K. have been living in limbo for over 2 years.

We want to present their stories to Toulouse, inform, ask for support for the 5 million living in limbo and bring discussion about the people’s vote into France.”

Limoges, Jardin Champs Juillet from 10 am. Organiser Janette McLenahan says “We are gathering in solidarity, showing our support for the march for Europe. Some press will be there too. Bring a picnic and your own ideas for the day”.

Our presence at the London march is part of a multi-part joint action over a 6 week period which we have termed The Last Mile. In spite of all the promises made by both sides of the negotiating table, our rights are still not sorted and there is very little time left to make a difference.

Most of us have been watching the rollercoaster events in the UK Parliament this week with our hearts in our mouths. Will there be a deal? Won’t there? And the question on our lips: where does all of this leave us?

Talk is in the air of unilateral agreements.

Theresa May has said that she wants to protect the rights of EU citizens in the UK even if there isn’t a deal. France is proposing to pass a decree that would open the way to protect at least some of the rights of British people living in France even if there were no deal. But promises don’t protect people – only properly binding treaties do that.

That’s why we’re asking both the EU and the UK to give us true peace of mind for the future, by protecting and guaranteeing our existing rights under international law using the Article 50 procedure.

In the next article I’ll tell you more about this and explain why we don’t believe that unilateral arrangements can be anything more than a last-ditch, all-else-has-failed solution. I’ll also tell you how you can take part in the Last Mile citizens’ lobby and do your bit to help properly secure your rights.

Kalba Meadows is citizens' rights coordinator of the group Remain in France Together, and a member of the steering committee of British in Europe.