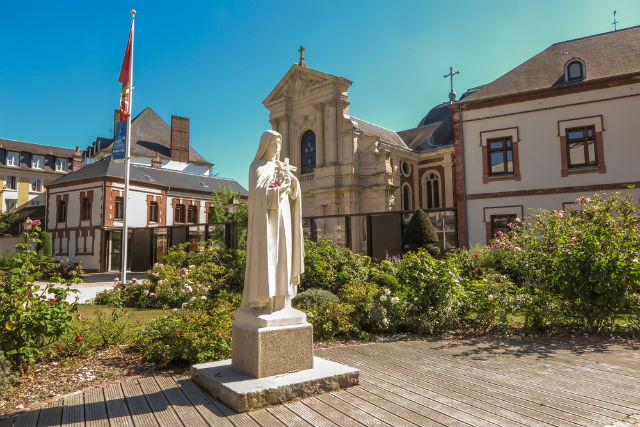 Photo: 1Tomm/Depositphotos
Where is it?
Lisieux is a town in the Calvados department of the lush, green Normandy region in north west France.
It's renowned as a religious site and a pleasant stop off point for those touring the region and heading towards better-known towns such as Deauville for the summer season.
But I think it's worth a trip in its own right. Google Maps
How to get there
Lisieux railway station connects the Paris-Cherbourg and Paris-Trouville/Deauville mainlines and is served by Corail Intercités Normandy trains.
Lisieux is also accessible by the transport express régional (regional express) trains on the Basse-Normandie and Haute-Normandie routes.
To reach the town by car, the D613 (formerly route nationale 13) crosses the town from east to west. The second main road of Lisieux is the D579, leading off to Deauville and Orne. Basilica of St. Thérèse, Lisieux. Photo: Depositphotos
Why go?
Lisieux is known across France as the second most important religious site for Catholic pilgrimage in the entire country, after Lourdes.
Atop the highest point of this medieval town, the remarkable Basilica of Saint-Therese rises up into the sky and creates a focal point for the town.
Lisieux has some 45,000 inhabitants and welcomes thousands of tourists each year.
Whether you're able to visit for the day or stay overnight, Lisieux is a fascinating stop for anyone touring the Calvados region. It's worth it even if just for the architectural and engineering splendour of the Basilica itself — not to mention the warm buzz of the town, making it enjoyable for couples and families alike.
Saturday mornings are market day in the central square of the town and Lisieux boasts the biggest weekend market in the entire region. It's the perfect place to pick up to pick up fresh produce, as well as homeware and clothing.
Make sure you arrive early like we did to secure parking and get the best deals, especially on leather goods. Lisieux town centre. Photo: Depositphotos
When to go
Lisieux is stunning enough to visit at any time of year.
But naturally, with more tourists visiting the town in spring and summer, you might want to brave the slightly chillier weather and warm up over a hearty dinner at the end of the day.
Tips
If time allows try a delicious cocktail before dinner at the Bistro Gourmand (8, Boulevard Duchesne Fournet).
We stayed in the three star Comfort Hotel Cathedral (with some rooms boasting views right up to the Basilica itself), which has pleasant a staff and a friendly atmosphere at a modest price given its central location.
If you think there is a place we should include in our “One place to visit in France this weekend” series email me at [email protected] following the same Q&A format as above.