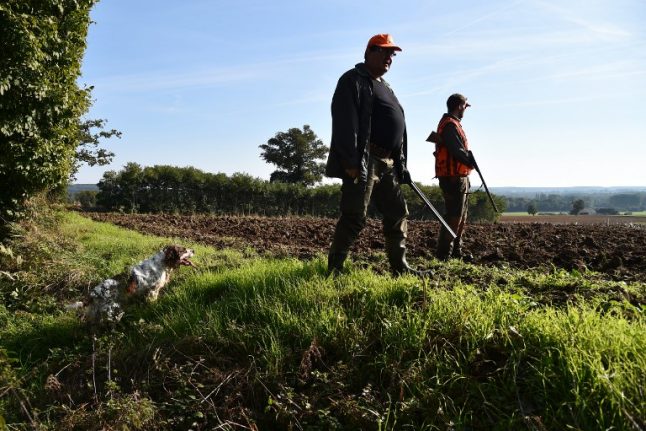 Photo: Jean-François Monier, AFP
France's British community, but also all of those who enjoy mountain sports and in addition to that concerned nature lovers, were deeply shocked by the death of Marc Sutton, who was killed by a hunter in Montriond in the Haute-Savoie (a region in the Alps of eastern France).
Let's take this opportunity to look at how important hunting really is in France today. Currently, only a minority of French people hunt – roughly 1.5 percent of the population, and most people in France actually reject it.
An IPSOS poll ordered by OneVoice – just after France's former Environment Minister Nicolas Hulot resigned – clearly illustrates this: 84 percent of French people feel that hunting actually poses a danger to them; is cruel to animals and belongs to the past.
Fewer and fewer people in France hunt nowadays, in fact the number of hunters has been falling for decades. But the impact of hunting on animals – which already suffer from pollution and the deterioration of their habitats – is growing.
The fact that hunters want to promote their hobby and increase its appeal means that the public is more aware of hunting than it used to be. That's why the better-informed younger generations now reject this outdated activity.
Many French people now know how cruel some hunts (such as foxhunting or hunts in which animals are pulled from their lairs) can be and are taking action to stop it.
More information is required to make people aware that hunting needn't exist, that it serves no purpose from an ecological point of view and that it is even detrimental for the balance of the ecosystem.
This is why calls to ban the practice altogether – which the RAC in particular is pushing for – or to ban it on Sundays, are gaining ground. Photo: Jean-François Monier, AFP
Until now, politicians, who often lag behind people's aspirations for social change, have backed hunters for politically-motivated reasons and because of cronyism.
The hunting lobby, which is in the hot seat right now, is very influential all the way up the high echelons of power and will be even more so since the cabinet reshuffle this month.
Our leaders are locked in their ivory tower and stick to outdated visions without being aware of the changes society calls for or simply don't want to accept these changes.
One group of politicians has for a long time wielded a lot of influence and is closely associated with the hunting world because of certain religious beliefs (such as the president of the French Senate) or because it relies on the support of hunters in its constituencies.
Over the years, measures taken by successive governments have gone in the same direction: increased pressure from hunting groups and special favours given to hunters.
Groups which oppose hunting continue to fight their corner and the majority of the French population knows their struggle is legitimate.
The Rassemblement pour une France sans Chasse (RAC) ('the Union for a France Free of Hunting') is a charity which is calling for hunting to be banned and has practical solutions that can be implemented after the ban is put in place to enable a harmonious and peaceful cohabitation with wild animals.