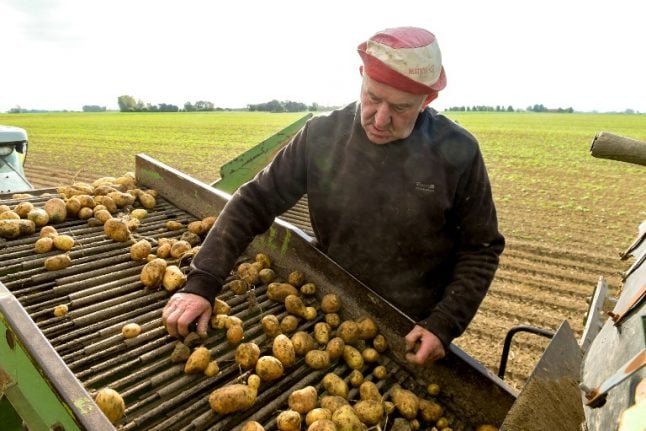 The potatoes “first lacked water and then when rain fell in July started growing anew” which means the original plants lost starch and gained too much water, spoiling them, said Regis Dumont, a potato farmer from Warhem near the Belgian border.
Then they got a roasting, with temperatures soaring to 37 degrees centigrade (98 Fahrenheit) in August, unusually hot for the northern French plains which account for two-thirds of the national potato crop.
All five top European Union potato producers — Belgium, Germany, the Netherlands, France and the United Kingdom — have been hit by the unusually hot summer weather. Photo: AFP
Total production in France is likely to drop to around 24 million tonnes, compared to 29 million last year, said Francois-Xavier Broutin of the National
Union of Potato Producers.
Apart from farmers, producers of French fries are also being hit.
“We have to dunk the potatoes in salt baths to eliminate the bad ones,” says Christian Vanderheyden, a senior executive at McCain Potato Products, explaining that rotten potatoes float to the top.
“This requires more equipment and higher costs,” he added.
Down the food chain, Mickael Orgaer, who sells chips from a van in the Nord-Pas-de-Calais region, says the price of a five-kilogramme sack of potatoes had risen 23 percent, forcing him to pass on the extra cost to customers.
“Because the potatoes aren't ripe enough they spit out water and their size means the chips are smaller,” he said.