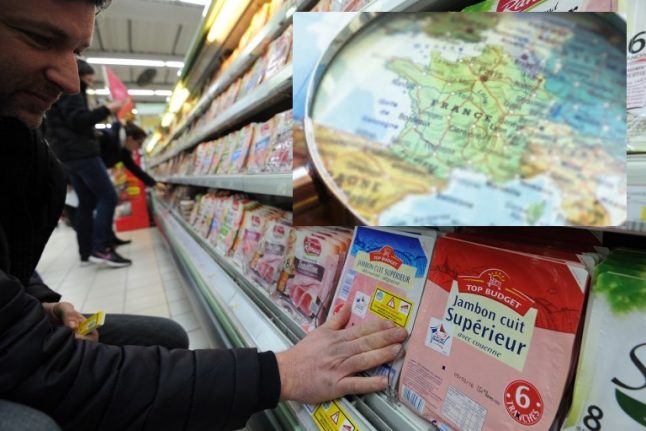 If getting a good a deal on cold meats in French supermarkets has seemed hard to come by, here’s a possible reason why.

Fourteen renowned ham producers are suspected of having colluded to fix the price of their pork products between 2011 and 2013, according to France’s Competition Authority.

The cold meats scandal, which has seen the French press refer to suspected offenders of the likes of Fleury Michon, Nestlé, Les Salaisons Celtiques and Campofrio among others as the “Ham Cartel”, follows similar French food industry price-fixing fiascos involving chicory and producers (handed a €3.6 million fine and €242 million fines respectively in 2012) and yoghurt manufacturers (given a €193 million fine in 2015).

For those unfamiliar with why price fixing is illegal in France and many other countries around the world, the objective of such collusion is usually to push the price of a product as high up as possible, generally leading to huge profits for the sellers. 
Congestion charges: The French cities you might soon have to pay to drive into

France's new draft law on mobility is calling for drivers in towns and cities across l'Hexagone with a population of more than 100,000 to pay up to €20 to use their vehicles during rush hour (for car drivers the figure is more likely to be between €2.50 and €5 depending on the city's population).

A total of 14 areas encompassing more than 30 urban areas in metropolitan France have been unveiled as the first that are open to taking part in the congestion scheme by the end of 2020:

Read more about it here.

Gare du Nord will be closed this Saturday

If you were planning on catching a train from or getting off at Paris’s emblematic Gare du Nord this Saturday, bear in mind that services will gradually be reduced throughout Saturday and by 8.30 pm the station will be completely closed.

The reason for this is the installation of a new control tower, which will see 300 SNCF employees work at top speed to finish by 5am Sunday, when services are expected to get back to normal.

If you’ve already booked your ticket don’t panic as there will be a number of replacement buses to help travellers with their journeys, connecting Gare du Nord with other Paris stations. The French government has been ordered to pay €4.7 million to Toulouse City authorities after it sold them a plot of land which was found to contain 50,000 shells, cannonballs and other explosive ammunition dating back to the Napoleonic era.

This 27-hectare site, home to a brand new eco-neighborhood in the southern city, was unsurprisingly once the location of a 19th century weapons factory. The land was sold in 2009 under the pretence that it had been cleared of all dangerous residue and archaic ammo. The hefty fine should hopefully teach state authorities to tread more carefully in future.

If wasteful public spending gets your goat, wait until you hear about this story coming out of the small commune of Ruelle-sur-Touvre in France’s Charente department (Nouvelle-Aquitaine, southwestern France).

France’s state rail company SNCF has just started revamping the local station, even though it’s been closed since March 13 of this year. The public transport authority talks of only a “temporary closure” but local elected official Michel Tricoche suggests the opposite.

“This line will never reopen”, he told Ouest-France.

That’s despite the fact that they’re splashing out an eye watering €140 million on new railway lines and a modernised station.

According to a 2014 census by INSEE, Ruelle-sur-Touvre has just over 7,000 residents and is a stone’s throw away from departmental capital Angoulême, which does have a station open to the public. Wasteful or what?