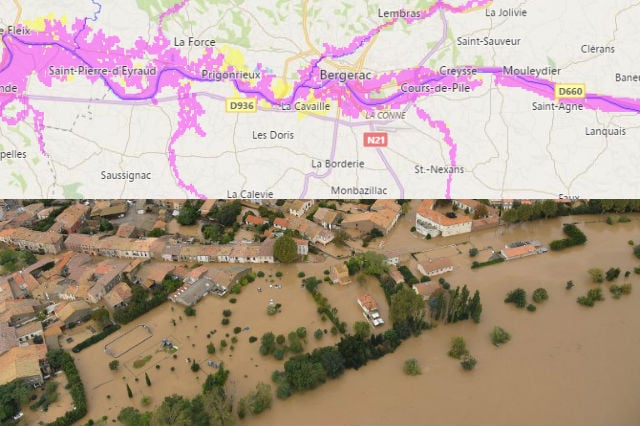 Every year in France devastating floods destroy homes and more often that not claim lives.

Only this week, flash floods killed 14 people in towns and villages around Carcassonne in southern France.

Following those floods the French government declared a state of natural disaster for some 126 communes around Carcassonne.

The state of natural disaster (Etat de catastrophe naturelle) is a special procedure set up in France in 1982 so the victims of exceptional natural events, such as flooding, as well as drought, can be adequately compensated for damage to property.

Overall, since 1982 over 217,000 official natural disasters have been registered all over France – over 60 percent of which were due to flooding.

On average some 4,720 communes are declared a state of natural disaster each year.

The worst year on record was 1999 when when 29,506 states of natural disaster were declared.

These extreme events can impact most parts of France from the north to south and west to east but there are small pockets of the country that are remarkably immune from all types natural disasters.

But these safe havens, if they can be called that – where no claims for natural disaster have been made at all – only make up 3.5 percent of the country. In other words just 1,297 out of some 37,000 have been natural disaster free since 1982.

They are the areas in white in the interactive map from France Info below. So basically if you want to avoid all kind of natural disasters in France whether floods, mudslides, avalanches, tsunamis and even earthquakes, then look to the east.

There are clusters of communes in part of Burgundy, the Ain department in the east and parts of the Alps that have never experienced a natural disaster.

In Burgundy the communes are concentrated in the Côte d'Or department which is famous for producing some of the country's most famous wines.

Famous labels Mersault and Pommard plus, the town of Beaune, considered the gateway to Burgundy wine country have never experienced a disaster.

And the same can be said for numerous communes clustered together in parts of the Hautes-Alpes and the Alpes-de-Haute-Provence departments in the south east.

The French towns and cities most affected by these natural catastrophies (although they are overwhelmingly floods) over the past 30 years are Nice, Cagnes-sur-Mer, Antibes and Cannes – all found on the French Riviera – and Bordeaux on the south-west Atlantic coast.

In these towns and there cities there have been between 40 and 50 official states of natural disaster recognized between 1982 and 2018.

Floods are the cause of the majority of natural disasters in France, and most of the claims around floods made are a result of ensuing mudslides.

As the map below shows (CLICK HERE for interactive version from France Info) towns and cities crossed by large rivers like the Rhône, the Loire and the Garonne in the west suffer particularly from flooding, as does the the Alpes-Maritime department round Nice and the city of Marseille and the south west coast around Narbonne. The map below from France's official flood-watch agency Vigicrues, which informs the public about the risk of flooding, gives an idea of where France's main rivers are. But perhaps one of the best maps to consult if you really want to investigate the flooding risk in each part of the country is the flood map below from FM global.

The interactive map (available here) allows users to zoom in to parts of France to identify those areas most at risk, albeit it must be stressed the risk is still low. The zones marked pink have a one percent chance of experiencing flooding each year while those areas marked yellow have a 0.2 percent chance each year.

The map below shows the areas alongside the Dordogne river in south west France that are at risk from flooding. And here's a map of the Paris region, which has also experienced widespread flooding numerous times in recent years, most notably in January when the River Seine almost reached the six-metre mark.

The map shows the area to the south where the Seine and the Marne rivers meet is particularly at risk.