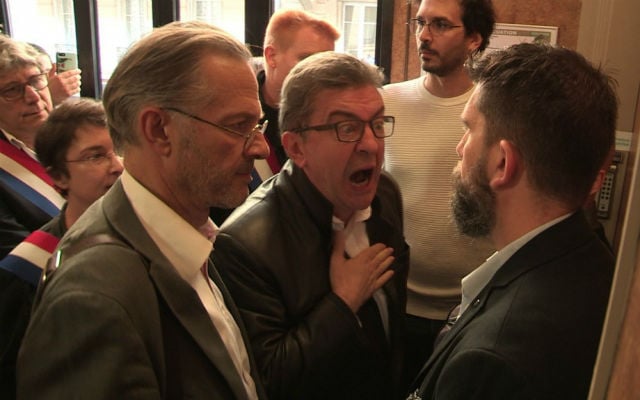 The leader of the France Unbowed party has drawn criticism over Tuesday's outburst, with ruling party members accusing him of placing himself above the law and trying to win votes by claiming to be the victim of a political plot.

The 67-year-old said Wednesday he had “no regrets” about his reaction, explaining that he was furious because of the way the searches were carried out — and not because of the fact that they took place.

“They searched us as if we were a band of thieves,” he told BFMTV channel, adding that as a person of “Mediterranean” origin — he was born in Morocco — he had a tendency to lose his temper and there was “no need in making a big deal of it”.

A series of standoffs between Melenchon and the investigators were captured in videos that were widely shared on social media.

The first occurred after officers arrived at Melenchon's Paris apartment at dawn and began combing it for evidence in two investigations — one into the party's use of European Parliament funds, the other into the funding of Melenchon's 2017 presidential campaign.

Filming the scene live on Facebook, the MP cast himself as the victim of a state plot to silence him.

“Tomorrow they'll find an excuse to throw me in the slammer like (former Brazilian president) Lula… It's not normal!”, he said.

Things got more heated later at the party's headquarters, which was also searched by police along with the homes of several other party officials.

Arriving at the party's offices, Melenchon and a group of party officials tried to force down the door.

“The republic, it's me, I'm the one who is a parliamentarian. Get out of the way and open up this door” an apoplectic Melenchon shouted at the policeman standing guard outside before proceeding to try ram the door open.

After gaining entry through another door, the former Socialist minister rounded on the prosecutor overseeing the operations inside, shouting: “I'm the leader of an opposition group. You should not be treating me in this way. I'm not a cigarette thief!”

In a video shown on the Quotidien news programme, Melenchon is then seen shoving the prosecutor and a policeman, taunting the latter: “Go on, just try and touch me!”

In other scenes, a policeman is seen wrestling a party member to the ground, sparking a furious reaction from France Unbowed MP Alexis Corbiere, who shouted: “No one touches a comrade.”

The images sparked criticism of Melenchon, a political veteran famous for his tirades against globalisation and economic liberals, and his party, which has led opposition to President Emmanuel Macron's pro-business reforms.

“Jean-Luc Melenchon, an outburst too far?” the leftwing Liberation newspaper questioned in a front-page headline.

Government spokesman Benjamin Griveaux accused Melenchon of taking the same line as far-right leader Marine Le Pen, who has also cast the multiple investigations into her party's finances as a political plot.

“It's unacceptable in France to question the independence of the judiciary,” Griveaux said, adding that Melenchon was using “the same arguments” as his arch-foe Le Pen, leader of the National Rally party (formerly the National Front).

The leader of the centrist Modem party Francois Bayrou said that it was not unusual for a French party, including his own, to be raided by police.

“A politician is as answerable to the law as others,” he said.

But the National Rally came to Melenchon's defence, with European parliamentarian Nicolas Bay calling the raids a sign of the “interference of
the judiciary in the democratic process”.

In a rare joint statement, the leaders of the three top French energy companies came together to urge the French public to reduce their energy consumption.

The heads of TotalEnergies, EDF and Engie published an open letter in the Journal du Dimanche newspaper on Sunday calling on the French to “immediately” reduce their consumption of petrol/gasoline, diesel, oil, electricity and gas in order to help stave off the shortages and soaring prices that could threaten “social cohesion” in France this winter.

The letter begs people to begin “acting this summer,” on cutting energy and fuel usage, adding that this “will allow us to be better prepared to face next winter and in particular to preserve our gas reserves.”

Why is there a risk of shortage this winter?

In light of the war in Ukraine, deliveries of Russian gas to France and other European nations via pipeline have been significantly decreased. Thus France, like the rest of Europe, is attempting to fill its gas reserves in preparation for this upcoming winter. The goal is to have French gas reserves at 100 percent by this fall.

As Americans prepare for ‘driving season’ (when many families use their cars to go on vacation) and China begins to relax some of its lockdown measures, the world oil market is looking at high demand that may not be in line with current production capabilities.

France is a relatively small consumer of Russian gas, but does depend heavily on domestic nuclear plants for energy – production of nuclear energy is however threatened by two things; droughts that mean shortages of water for cooling purposes at plants and maintenance issues that have lead to several plants being temporarily shut down for safety

Concern for adequate energy resources has been on the minds of energy providers for several years, according to the manager of France’s Electricity Transmission Network (RTE).

France has been anticipating that the winters of 2018 to 2024 would be “delicate” as this is a pivotal period for energy transition after several coal-powered plants were closed. France’s oldest nuclear plant, Fessenheim, was also shut down and disconnected from the French grid in 2020.

As of late May, almost half of France’s nuclear reactors were offline due to planned closures, as well as issues related to corrosion.

What is the real risk of shortage this winter?

“There is no risk of shortage in the short term,” assured France’s Ministry of Environment in May, as there are up to “90 days worth of strategic stocks, as well as commercial stocks, which can both be distributed throughout the country as needed.”

Experts like Professor Jan Horst Keppler, from Paris-Dauphine University, also do not anticipate a widespread shortage, though, “potential spot shortages are possible.”

Horst Keppler clarified that it is not possible in many cases to substitute one quality of oil for another, which could mean that some refineries may experience “spot shortages.” Therefore, he urged that consumers and providers will have to pay close attention to “the availability of gasoline, diesel and heating oil” even more so “than the availability of crude oil.”

Other European countries, however, are sounding the alarm. Germany, for example, will return to coal-powered energy in order to meet demands this winter.

What are the energy companies doing to combat risk of shortage?

According to their statement, the heads of France’s top energy providers accept their “responsibility to act on the supply side” by implementing short term plans such as “diversifying gas supplies, proactively filling storage facilities, speeding up liquified natural gas (LNG) imports, and reactivating ‘mothballed’ facilities.”

Additionally, the leaders hope to launch a “major energy efficiency program” and a “national hunt for waste.”

In addition to ensuring adequate energy stocks for the winter, the three leaders also urge the French public to consider reducing consumption as a means for increasing household purchasing power in the fight against rising cost of living, as well as an effort to reduce greenhouse gas emissions. They also said that reducing energy “immediately” will show solidarity with other European nations at greater risk, particularly those in Eastern and Central Europe.