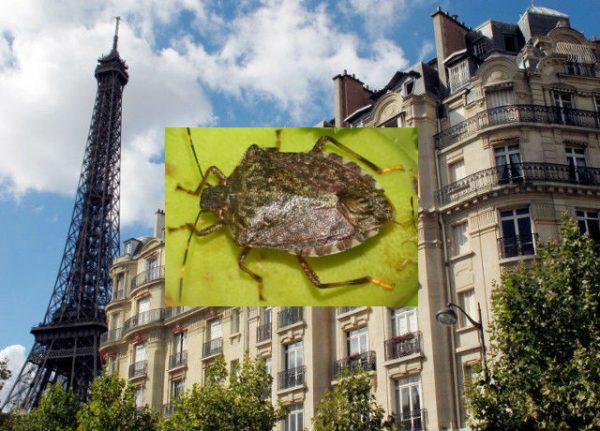 Photo: Wikicommons
The bugs, known as a punaises diaboliques in French, might hail from Asia but at the moment it seems they can't get enough of la vie en rose.
And with winter approaching and the weather cooling down, the stink bugs are on the hunt for a warm place to stay and have started shacking up in French homes, including in cities, and especially in the capital.
“Since September, we have been overrun by calls and sightings from inhabitants in nearly every Paris arrondissement from north to south,” biodiversity expert Romain Garrouste told Ouest France.
“For this insect, this time of year marks a period of investigating possible hibernation locations for the adults. Our houses are nicely heated and sheltered, making them perfectly welcoming [to the bugs].”
The stink bug, known also as “halyomorpha halys”, originally comes from Asian countries including China, Japan, the Korean peninsula, and Taiwan.
It is a brown-grey insect with small white marks and measures between 12 mm and 17mm.
The odor from the stink bug, which it emits through holes in its abdomen, has been characterized as a “pungent odor that smells like coriander” and it is a defense mechanism meant to prevent it from being eaten by birds and lizards.

Although it's worth noting that handling the bug, injuring it, or attempting to move it can also trigger it to release 'the stink'.
The bug is known for being highly invasive and for damaging vegetation, with the first sightings of the creatures occurring in southern France in 2015 before they arrived in Paris in October 2016.
Since then their numbers have been increasing, something which has been put down to the warm autumnal temperatures.
However if you do see them in your home while you might be alarmed there's no need to worry because they pose not threat to humans although they can cause problems for humans with allergies.