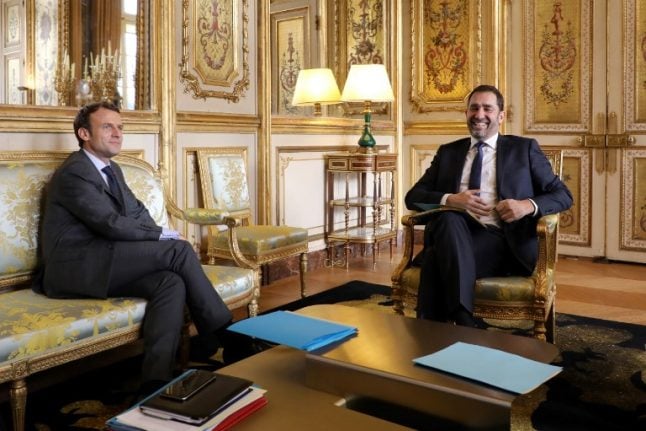 The announcement which was first expected last week and then delayed due to the deadly floods in south west France on Monday came in the form of a statement released by the Elysée Palace.

The most eagerly awaited name was that of the new interior minister who was replacing Gerard Collomb who had sparked the government crisis by resigning almost two weeks ago.

His job went to Macron's close ally and former Socialist MP Christophe Castaner, who had previously been Secretary of State in charge of relations with parliament.

That role will be taken by Marc Fesneau, an MP with centrist party MoDem.

READ ALSO: What the reshuffle means for Macron and for France Castaner is one of the main figures in Macron's inner circle, having backed him from the early stages of his campaign for the presidency, and currently serves as head of Macron's party, the Republic on the Move (LREM).

The current head of France's domestic intelligence agency, Laurent Nunez, was named as his understudy at the interior ministry.

In other movements Jacques Mezard has been replaced as the minister for territorial cohesion by Jacqueline Gourault who had worked as a secretary of state at the interior ministry.

The key role of agriculture minister has been taken away from Stephane Travert and handed to Didier Guillaume, the president of the Socialist Party in the Senate.

Franck Riester, a member of the centrist group of MPs Agir – Les Constructifs takes over from Françoise Nyssen as Culture Minister.

There were also several other fresh faces in the government with new secretaries of states at various ministries.

Macron's popularity ratings have slumped to an all time low in recent weeks and he had been under pressure to name a new government.

Macron's delay in carrying out the reshuffle, caused in part by his difficulty in convincing big names to join his team, has added to the sense of
a loss in momentum after a fast-paced first year in office, analysts say.

Reports and rumours abounded in the French press that he was struggling to fill key roles with various individuals apparently refusing to work with the embattled and unpopular president.

There were also rumours of a reported bust-up between Macron and his prime minister Edouard Philippe, which were dismissed by the PM.

The Elysée said the delay in naming the government was due to the time needed to carry out background checks on the new ministers and secretary of states.

Macron will hope the reshaped government will signal a fresh start after a torrid few months.

The centrist suffered the first major scandal of his presidency in July when a security aide was filmed hitting a protestor, while three ministers have quit since the beginning of September.

A slowing economy and concerns about spending power in France, coupled with a series of verbal gaffes that have given ammunition to his opponents, have also served to undermine his popularity.

Macron's polling numbers have slumped to their lowest level since his electoral victory in May 2017, with surveys showing that only around 30 percent of French voters have a positive view of his presidency.