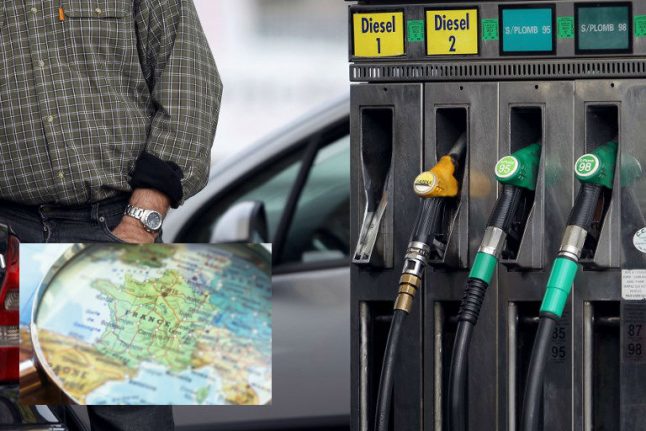 For the first time, diesel is more expensive than petrol

Diesel used to be the cheaper fuel, but no longer. Around Paris, 60% of gas stations, diesel prices have overtaken petrol prices, and in one fifth of gas stations nation-wide, Le Parisien has reported.

This is a first, and is a result of tax measures. Higher taxes on diesel were introduced under the last presidency and taken on by Emmanuel Macron, who has vowed to bring the taxes on diesel in line with petrol taxes, which have historically been much higher.

In 2018, taxes on diesel will rise by 7 centimes and 4 centimes on petrol. This could mean a lot of unhappy drivers: 80% of cars in France run on diesel, according to Le Parisien.

Drivers fined near Mulhouse for ogling at road accident

If you drive past a road accident in France (and the police are already dealing with it) don't slow down or you could get a fine!

That's what happened to 40 drivers on Wednesday near the town of Mulhouse in the eastern Haut-Rhin department.

The police decided to take action after dozens of drivers slowed down to look at an accident on the A36 motorway bewteen Colmar and Mulhouse, caused by a collision between a lorry and a van.

The police were so fed up trying to deal with the traffic and preventing other accidents from occuring, they decided to fine drivers, hoping it will dissuade them from slowing down in the future.

“We ended up making the area secure. We realised people were slowing down in both directions to take photos or film the accident with their mobile phones,” an exasperated policeman told France 3 Grand Est. Around 40 drivers where fined, and could end up paying up to 135 euros and lose 3 points on their driver's license.

Corsica named France's 'champion of poverty'
It's not exactly the kind of title the Corsican authorities will be proud of.
It seems poverty is gaining ground on France's 'Isle of Beauty', according to analysis revealed on the island's 'day of solidarity' which highlights the region's homelessness problem.
Corsica has a poverty rate of 19.8 percent, taking first place in terms of poverty levels in France ahead of Hauts de France and Provence-Alpes-Côte d'Azur.
In Corsica, most of those affected by poverty are under-30, with 28.9 percent of them touched by the issue, as well as people over 75, with 17.5 of them affected.

Drought persists in the east

While the south west is experiencing one of its worst floods in decades, the east of France is suffering from the opposite problem.

The drought in the north east of France which started in the summer is only getting worse as rainfall continues to elude the area.

The river levels in the worst affected departments of Marne and Ardennes are extremely low, with the moisture levels in the soil around the town of Rethel in Ardennes continuing to plummet.

In September the soil moisture flirted with the levels of 1976, the year of drought of reference in France, said Thiery Beaudenon from France's national weather agency Meteo France.

Without significant rainfall by November, experts fear there will be long-term consequences.

Snow tyres soon set to be obligatory in France's mountains

A new measure set to be approved by French law is about to make snow tyres in France's mountainous areas obligatory.

46 departments including the Savoie and Haute-Savoie in the French alps could be affected by the new measure, which is set to enter into force next winter.

From then on, cars in these areas will have to have snow tyres from a fixed period ranging from November 1st to March 31 each year.

Other Europeans countries have already implemented similar measures over the winter months, including  Austria, Germany, Estonia and Finland.

As many parts of rural France face a dearth of doctors, some areas are coming up with new ways of attracting GPs.

In the Ardèche in south eastern  France, local authorities were so keen to recruit a GP they offered to pay successsful candidates a whole year's rent.

The offer paid off. 39-year-old doctor Anca Don from Romania will set up in the village of Andance in November and serve a number of villages in the area. One other job is still up for grabs, but the local authorities are optimistic they will be able to attract another doctor soon.