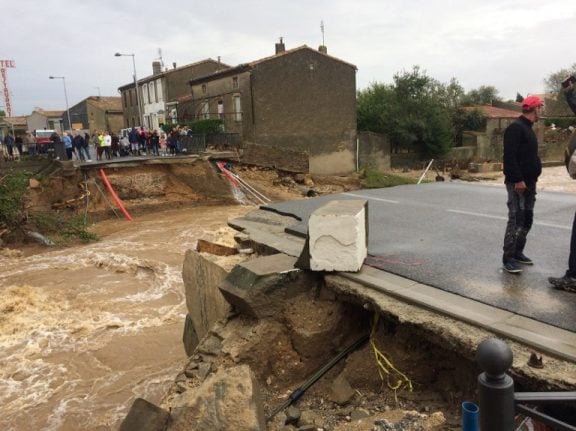 People stand on the road by a bridge over the Trapel river that collapsed Villegailhenc in the Aude department. Photo: AFP

At least 10 people died when violent rainstorms turned rivers into raging torrents in southwest France on Monday, prompting some of the deadliest flooding in years, officials said.

The Interior Ministry had earlier stated that the floods had claimed 13 lives but later released an updated death toll.

The equivalent of three months of rainfall was dumped overnight in the Aude region in just a few hours, swelling rivers and flooding fields and towns, officials added.

President Emmanuel Macron's office said he would visit the affected areas “as soon as possible,” while Prime Minister Edouard Philippe, who is also the acting interior minister, was headed to the Aude region later on Monday.

Another individual was injured as a house collapsed in Cuxac.

French Prime Minister Edouard Philippe announced that he would visit the Aude department on Monday afternoon “as soon as conditions allow it”.

Philippe also tweeted (see below) that “350 firefighters are in place. 350 more firefighters are on their way. 7 helicopters have been mobilized. I am keeping myself informed of the situation hour by hour.”

The Aude, which has been particularly affected by the period of heavy rain in the south, was placed on red alert – the very highest warning – for rain and flooding by France's national weather agency Meteo France on Monday morning.

Red alert indicates that people in the area should practice “absolute vigilance” due to the risk of “dangerous weather of an exceptional intensity”. Firefighters in the area were called to more than 250 incidents overnight from Sunday to Monday.

In the space of five hours, “between 160 and 180 mm of water fell on Carcassonne”, the equivalent of five months of rainfall, said they Aude prefect Alain Thirion.

“We have about fifteen communes in a delicate situation,” he said, adding that six are in a “worrying situation”.

The mayor of Carcassonne Gérard Larrat said he was increasingly concerned by the rising river waters.

He said the own was calm and members of the public were following instructions to stay at home.

“The schools are closed and no buses are running,” the mayor said.

Elizabeth Dale who is in Carcassonne told The Local on Monday morning: “It's been raining again and police are stationed on bridges and only allowing emergency vehicles to cross.

“It does like the water levels are dropping but who know what will happen in the next few hours. There are many people like ourselves who are stuck on the wrong side of the river.”

Several roads have been closed in the area around Carcassonne, as the map below shows.

The municipalities of Villemoustaussou, Villegailhenc, Conques, Villardonnel, Floure and Trèbes are the most affected, according to the prefect, with the water levels in Trèbes rising a whopping eight metres in five hours.

“All schools, colleges and high schools in the department of Aude are closed,” tweeted the prefecture of Aude, which advises its residents to avoid using their cars.

Train services in the area have also been affected, according to reports in the French press.

Six other departments in south-eastern France have been placed on orange alert — the second highest warning — for heavy rains and floods.

These are Aveyron, Herault, Tarn, Tarn-et-Garonne, Haute-Garonne and Pyrenees-Orientales.

People in these departments are advised to be very vigilant due to the risk of dangerous weather.

Two bodies from the same car were found on Thursday morning after several vehicles were swept out to sea during violent storms and torrential rain in the south of France.