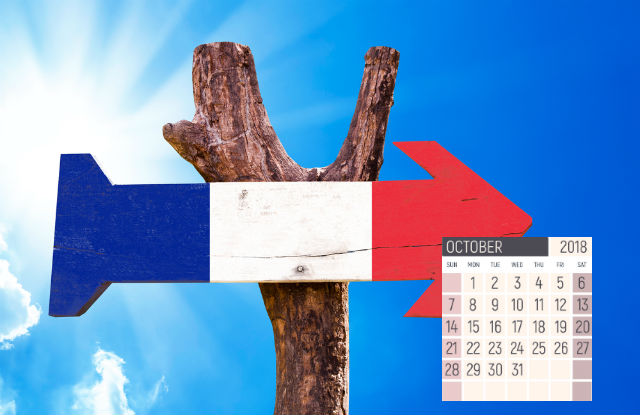 Reshuffle: Everyone thought the announcement was coming last week but the French are still waiting.
However it looks like President Emmanuel Macron's much anticipated reshuffle of his cabinet is set to finally be announced either Monday or Tuesday.
Macron is under pressure after the resignation of Interior Minister Gerard Collomb and opinion polls that show his popularity is lower than ever. Reports suggest there could be a fair amount of ins and outs too.
In other news, France's National Assembly will begin their examination of the first part of the 2019 budget on Monday.

The process, which is set to last until Christmas, will see MPs begin by looking at the part of the budget dealing with taxes, and the debates are expected to be tense. The President of South Korea Moon Jae-in is making a state visit to France on Monday evening when he is set to meet French President Emmanuel Macron to discuss relations with North Korea, as well as climate and innovation.

Macron is set to welcome the Crown Prince of Abu Dhabi Mohammed bin Zayed Al Nahyan to the Elysee Palace on Tuesday.

“It will be an opportunity to deepen the strategic partnership between our two countries, to strengthen bilateral cooperation in political, economic, cultural and educational matters, and to discuss regional issues with the aim of working together for peace and stability in the Middle East and Africa,” said the Elysee.

The 12th edition of the World Forum for a Responsible Economy kicks of in Lille on Tuesday, an annual event which highlights ideas for how to build a responsible global economy.

The first Cubism exhibition in France since 1953 is set to open at the Centre Pompidou in Paris on Wednesday. Featuring artworks by Georges Braque and Picasso, the exhibition examines one of the founding movements of modern art. Photo: AFP
Thursday Oct 18th
Pensioners are set to take to the streets across France on Thursday after nine unions and pensioner associations called for the fourth protest this year.
The country's pensioners will be protesting against the government's budget which they say puts “pensions at risk” and threatens to “impoverish” them.
The 45th edition of the French capital's international contemporary art fair (foire Internationale d'art contemporain) is set to open on Thursday at the city's prestigious Grand Palais.
There will be a selection of modern and contemporary art and design at the event which will last until October 21st.
Friday Oct 19th
Friday marks the day of release of the posthumous album of French rock legend Johnny Hallyday entitled Mon pays, c'est l'amour.
France's King of Rock died in December 2017 aged 74 after a battle with lung cancer.
The festival Polar de Cognac, which celebrates the police and crime genre in graphic novels, television, film, literature and theatre, opens in Cognac in southwestern France on Friday. Photo: AFP
Saturday Oct 20th
Although this event isn't taking place in France, it does affect Brits living here… Indeed many of them will be travelling to London on Saturday to take part in the People's Vote and The Independent March for the Future, a demonstration in favour of a referendum on the final Brexit agreement.
Festival des Courges, Lyon, October 20th – 21st
Proving there's more to these autumnal veg than just Halloween carving, this years Festival du Courge in Lyon's botanical gardens is based on pumpkins, squash and all the other gourds which feature in fairytales.
If Cinderella's pumpkin coach alone doesn't pique your interest there will a be host of gourd-based activities for adults and kids, such as tastings (including oils and jams), performances, games, story workshops, market stalls and a guess the weight competition.
Sunday October 13th
The world's largest food innovation exhibition (Salon International de l’alimentation or SIAL) will open in Paris on Sunday.
The trade fair, which specializes in the food processing industry, is held every two years, with the first ever event taking place in Paris in 1964.