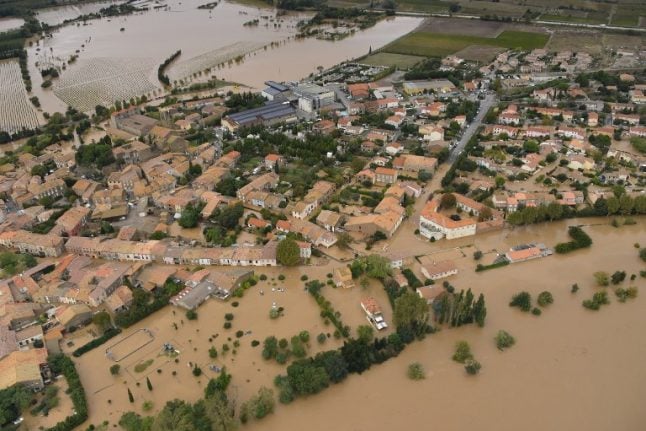 Firefighters walk in a flooded street during a rescue operation following heavy rains that saw rivers bursting banks on October 15, 2018 in Trebes, near Carcassone. Photo: AFP
The equivalent of three months rainfall was dumped overnight in the region of Carcassonne in just a few hours, sending rivers over their banks, including the Aude, which reached levels not seen in 100 years
Local authorities in the Aude department said 11 people were killed, a second reduction in the official toll which had earlier stood at 13, a figure given by the interior ministry.
Two people were still missing with eight others seriously injured, authorities added.
President Emmanuel Macron, whose office said he will soon visit the affected areas, offered “the sympathy and solidarity of the entire nation for the victims of the Aude flooding and their families.” The rescue operations appear to have delayed an expected announcement on a government reshuffle, triggered by the sudden resignation of interior minister Gerard Collomb nearly two weeks ago.
Prime Minister Edouard Philippe, who is acting as interim interior minister, said the government would ask insurers to process disaster claims and payments “as quickly as possible” while he assessed the damage in the rrrrrrregion.
One of the overnight victims was an 88-year-old nun was swept to her death as rising waters smashed through a nunnery in the village of Villardonnel to the north of Carcassonne.
“The water crashed through the building's main door and on through the door to her room, the lowest in the convent,” said Sister Irene, the mother superior. Photo: AFP
Elsewhere, flash floods overturned cars, gutted streets and battered buildings and bridges, especially to the north of Carcassonne where authorities ordered bridges closed.
The Aude's levels were expected to peak late Monday evening. Evacuations were still being carried out in several towns in the afternoon, local authorities said.
“There's water everywhere in the house. Everything is flooded,” Helene Segura told AFP by telephone from the hard-hit village of Villegailhenc, where at least one small bridge had collapsed.
“Rescue teams were deployed as quickly as possible, but operations have proved to be complicated,” said interior ministry spokesman Frederic de
Lanouvelle.
In the town of Trebes, near Carcassonne, the Aude rose eight metres (26 feet) in just five hours, officials said. According to the latest toll figures from the regional authorities, a total of six people died in Trebes, which made headlines earlier this year after a jihadist attacker killed four people in a shooting spree, including a police officer who took the place of a hostage.
Two elderly residents died overnight in Villegailhenc, where the main bridge collapsed, and one person was killed in Villalier. On Monday evening the body of another victim was found in Carcassonne making this one of the deadliest storms in France for a decade.
With many roads impassable, helicopters were used in the rescue operations.
Around 1,000 people were evacuated from the area of Pezens, also near Carcassonne, amid fears that a nearby dam could burst, and thousands of homes throughout the area were without electricity after strong winds brought down power lines.
The storms were triggered when a front of warm and humid air from the Mediterranean Sea slammed into colder air around the Massif Central mountain
range, inundating an area from the eastern Pyrenees to Aveyron further north.
This well-known weather pattern occurs three to six times a year in the region and nearly always triggers flash flooding.
But the French weather forecasting service, Meteo France, suggested these episodes had recently become more frequent and more severe.