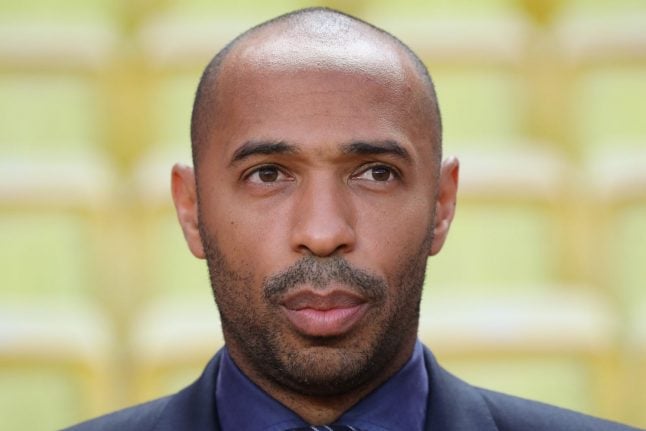 Now 41, Henry was named as the new coach of the Ligue 1 side on Saturday, replacing Leonardo Jardim, who was sacked in midweek following a string of poor results that left Monaco languishing in 18th in the league.

Henry was one of the greatest players of his generation, the all-time leading goal-scorer for both Arsenal and the French national team, but he has been building towards this moment for several years now.

After retiring from playing in 2014 at the end of four years with New York Red Bulls, Henry has divided his time between coaching and punditry work with British broadcaster Sky.

He has acquired his coaching badges, and spent the last two years working as an assistant to Roberto Martinez with the Belgian national team.

Henry's input as an attacking coach during Belgium's run to the World Cup semi-finals — where they lost to France — made an impression on the players he worked with.

“He loves football, he loves talking about what he has done, how things used to be, about his first World Cup. He has given me lots of advice to help me improve,” said Michy Batshuayi.

He had been combining that role with an extremely well remunerated job for Sky, where his comments were not always to the liking of his old Arsenal and Monaco mentor, Arsene Wenger — Henry expressed concerns about the direction Arsenal were taking towards the end of Wenger's long reign, which came to an end in May.

Arsenal in his sights?

It is hard to imagine that Henry has not set his sights on one day managing Arsenal himself, given his association with a club he represented with such distinction for eight years that there is now a statue of him outside the Emirates Stadium.

“Over the last 4 years I have had some extremely rewarding coaching experiences in football. These experiences have only made me more determined to fulfil my long term ambition to become a football manager,” Henry wrote on Twitter this summer, announcing his decision to quit his work as a pundit.

Born in the Paris suburbs to parents from the French Caribbean islands of Guadeloupe and Martinique, Henry began his playing career with Monaco, making his debut in 1994, aged 17.

His full France debut came aged 20 in 1997, and the following year he scored three goals as Les Bleus won the World Cup as hosts.

Henry also won Euro 2000 with his country and scored 51 goals in 123 appearances, although his international career ended in rather sour circumstances.

After his controversial handball against Ireland secured qualification for the 2010 World Cup in South Africa, Henry and France were knocked out in the group stage in a campaign marred by a player mutiny.

But nothing can sour his reputation at Arsenal, whom he joined in 1999 after a brief stint at Juventus. He scored 228 goals for the Gunners, notably starring in the “Invincibles” team that won the league unbeaten in 2004.

After leaving Arsenal in 2007, he had three years at Barcelona capped by winning the Champions League under Pep Guardiola in 2009, before finishing his career in MLS.

Matching as a coach the success he enjoyed as a player will not be easy, and he steps into a difficult environment at Monaco, who reached the 2017 Champions League semi-finals but find themselves rooted in a landscape dominated by Paris Saint-Germain.

But the job offers Henry the chance to show the French public what they mostly missed during a playing career in which he was perhaps underappreciated at home, certainly compared to his teammate Zinedine Zidane.

“There is no doubt he has a great career ahead of him in coaching,” said French Football Federation boss Noel Le Graet recently.

Now it is up to Henry to prove it.