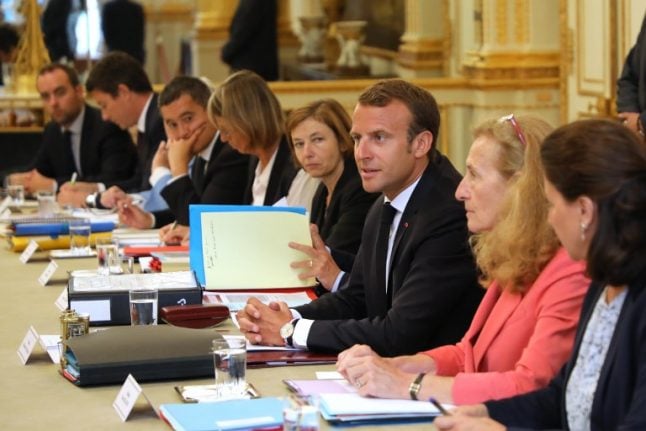 France's legion of political journalists are as frustrated right now as a raunchy dolphin swimming all alone off the coast of Brittany.

For three days now they have been desperately filling live blogs and manfully keeping rolling news channels going as they await the big announcement from the Elysée Palace.

President Emmanuel Macron, under pressure due to falling popularity ratings was set to reveal news of his government reshuffle on Tuesday, but then it all went quiet.

And speculation reached fever pitch. At least in those newsrooms.

Now Macron says he wont be revealing his chosen ones until Friday and insists he is happy to take his time for such an important event.

But what's the country meant to do for two, perhaps three more days? Are we just meant to carry on working as normal? What about the poor French journalists? Obviously some of them are filling their time writing about the reasons behind the delayed reshuffle.

Some suggest it's down to the growing split between between Macron and his Prime Minister Edouard Philippe while others believe it's simply a problem with finding enough people willing to work for an unpopular president.

There are also suggestions that various figures have turned down the offers made by Macron and Philippe, most notably among the list of candidates lined up to take the vacant post of Interior Minister.

It's also possible that the fact that all future ministers now have to have their past rigorously checked to make sure they have no dodgy history or hidden bank accounts in Switzerland slows down the process. No names will be revealed until the checks are done.

Maybe it's just Macron's tactic of toying with the same journalists who have given him a rough time recently, particularly over the Benalla bodyguard scandal.

But the president only has to look at his predecessor to know reshuffling his cabinet when things aren't going to plan will not save his presidency or boost his popularity ratings.

François Hollande shuffled the deck on various occasions in the hope of gaining some political momentum and stem the drop in his popularity ratings. He even made Macron finance minister in one reshuffle but it failed to stop the rot and Hollande ended up so unpopular that he became the first French president to decline to run for re-election.

“It is also an event whose political significance wears out quickly. Under François Hollande, there were fifteen. You must not multiply them because it's like a rifle with just two or three bullets.”

Gael Sliman, another political commentator and pollster added: “When you have a president in office for more than 6 months, you do not usually see a rebound after a reshuffle.”

Some say Macron would have to have a shift in his policies to the left to stand any chance of winning over the public. But the president has already said that's not going to happen. The people will change but the policies won't.

Macron already carried out a minor reshuffle in September after his ecology and sports ministers quit but that failed to alter much.

“The government has been on the defensive since the summer,” Ifop analyst Jerome Fourquet told AFP at the time.

“It's like riding a bike — when you stop pedaling, you fall over.”

So unless Macron makes some of France's heroic World Cup winning football players members of his cabinet on Friday (Ngolo Kante has the energy and tenacity and discretion to make a great defense minister) then the president will have to come up with a different plan if he doesn't want his presidency to finish the same way his predecessors did.

Although perhaps Macron is powerless.

French historian Jean Garrigues said this week that the “omnipresence of social networks” mean French people consume and reject their presidents these days as if they were a stale baguette.

“We have become a consumer society using its political class as a product whose obsolescence is programmed,” he told Le Parisien.

“Voters no longer believe in ideologies, they consume and then reject their elected representatives, including the President of the Republic.”