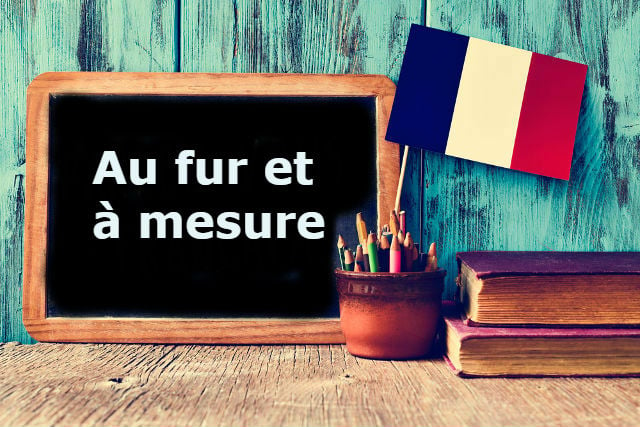 Why do I need to know au fur et à mesure?

It's one of those expressions that crops up all the time in spoken and written French It's hard to have the confidence to use it because it's a bir of a mouthful so it's worth knowing exactly what it means and how to use it correctly.

So, what exactly does au fur et à mesure mean?

The expression literally means 'at the rate and in measure' and you can check out the pronunciation here.

The expression dates back to the 16th century, when the word fur, which doesn't really mean anything in French anymore, meant price or value.

But when used today, its meaning can vary slightly depending on the context.

In general it means 'gradually', 'progressively', 'bit by bit', 'as you go along' or even 'throughout' and you can only use it for active, progressive actions such as washing dishes or spending money.

Or Je crée les règles au fur et à mesure (I make up these rules as I go along).

It can also mean simply 'as' although this is slightly less precise than au fur et à mesure which doesn't only indicate that two thing are happening at the same time but also the sense that the action was occurring gradually over time.

It's important to note that you can't use this expression with passive actions such as reading a book or taking a bath.

If you don't feel confident using au fur et à mesure you could use use petit à petit (little by little), peu à peu (bit by bit) or progressivement (gradually).

4. Elle sera payée au fur et à mesure qu'elle travaillera. – She will get paid as and when she works.