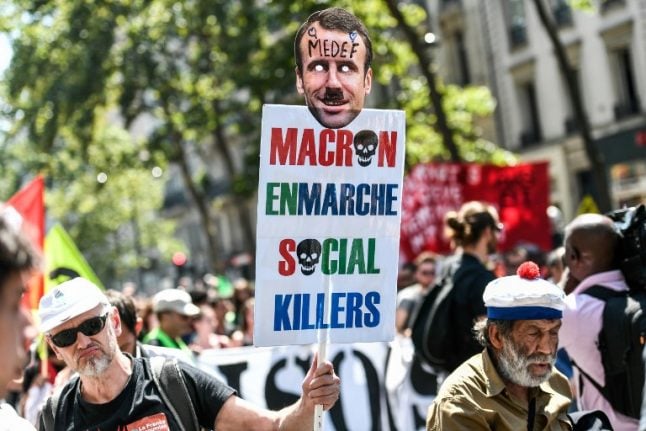 Around 100 protests are planned across the country as trade unions call on the public to show their anger at the government's social policy.

Two of the more hardline leftist trade unions Force Ouvrier and the CGT have called on workers, pensioners and students to join their protest against the government's policies which they claim are “destroying France's social model”.

For these trade unions the government's policies follow “a logic of individualization which undermines solidarity and social justice”.

They also “attack once again the weakest, most precarious and the poorest,” read a statement from the unions.

With the government planning reforms of the pension and benefits system the unions hope to flex their muscles and send a warning to President Emmanuel Macron.

Yet it's unlikely Tuesday's protests will be much of a concern o the president.

The unions face a stiff task in persuading workers to down tools and join their protests.

Unlike the mass protests before the summer Tuesday's action is unlikely to have any major impact on public transport.

Rail chiefs SNCF say the strikes will have almost no impact on services and Paris transport authority RATP say sevices on the Metro and RER lines will run as normal.

However transport systems locally may be impacted and some creches and schools may be closed due to the movement.

Part of the problem is that the unions are not united in their call to action with the more moderate CFDT union which has not called on its followers to join the strike.

Nevertheless there will be protests in cities such as Nice, Lyon, Marseille and Rennes. In Paris demonstrators have been asked to gather at Montparnasse at 2pm from where they will march towards Place d'Italie.