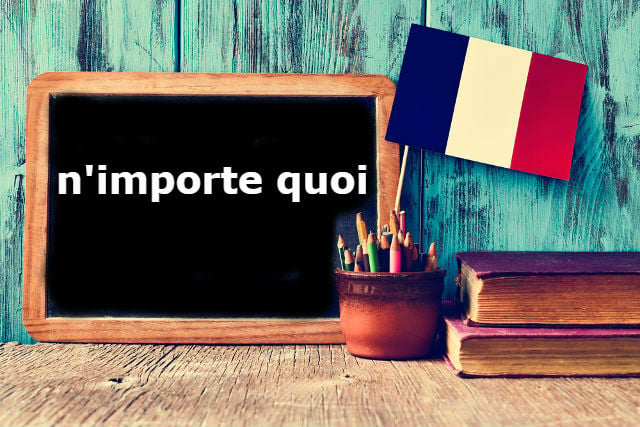 Why do I need to know this expression?

It's a great phrase to use if you are involved in an argument with someone in France. In fact if your language level is limited and you don't agree with the person you are arguing with you could just about get away with repeating n'importe quoi over and over  again. Until your opponent gives up and goes to bed.

But it also has other important meanings.

Literally n'importe quoi means 'no matter what' and it's pronounced more like 'n'amporter kwah'.

But it has a few different uses that can be translated as 'anything', 'whatever', 'nonsense', 'rubbish' or even 'bullshit!'.

For example you could say je ferais n'importe quoi pour apprendre français, which would translate as 'I'd do anything to learn French'.

But when it comes to arguing or disagreeing with someone you would use n'importe quoi when you want to suggest what someone has said is a load of rubbish or nonsense.

For example if someone says Le Brexit est un bon idée you would be within you rights to say n'importe quoi or even tu dis n'importe quoi (you are talking nonsense) unless of course you think that Brexit is a good idea.

And if you really want to stress that what the other person has said is really bonkers you can say it slowly like n'im… port…e quoi!'

And you can also abbreviate it in speech and in text messages to just 'n'imp' in the right environment. Such as discussing last night's drunken antics you could say hier soir, j'ai fait n'imp, which could translate as 'last night I was a complete chump'.

It can also be used in response to what people have done as well as what they have said. For example you could say Theresa May vous faites n'importe quoi, meaning Theresa May 'you're doing it all wrong', or 'you're making a mess of it'. Unless you believe of course that she has played a blinder.

And you'll often hear parents saying something to their misbehaving children along the lines of arrete de faire n'importe quoi, which could translate as 'stop acting up' or 'stop messing around'.

1. Il mangera n'importe quoi – He will eat anything

2. Je peux ecrire sur n'importe quoi – I can write about anything