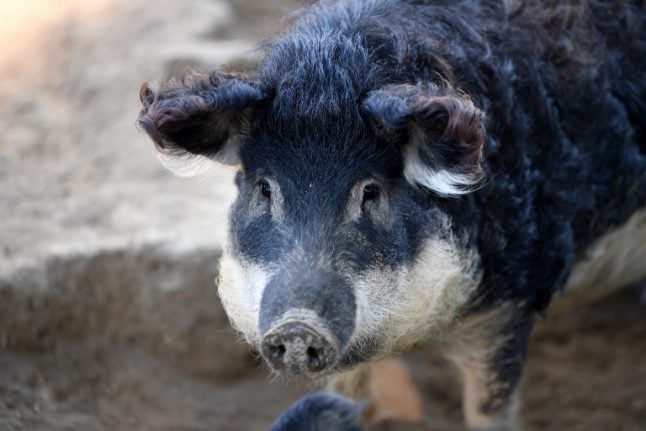 Products made from Mangalitza pigs cost nearly twice as much as those made with traditional pork. Photo: JEAN-PIERRE CLATOT / AFP
Bruno Bluntzer, who heads the Sibilia charcuterie company, considered a temple of saucisse and other delicacies in the food-mad city of Lyon, began experimenting with Mangalitza pigs after meeting a couple who were raising dozens of the rare breed.
“I was looking for a specific pig variety that I could work with differently, because I wanted a certain taste,” Bluntzer said.
After taking over Sibilia in 2011, he met Michel and Sylvie Guidet, who had begun raising Mangalitza pigs on their three hectares of land in the foothills of the Alps in La-Chapelle-du-Bard.
Michel Guidet, a biochemist who worked for years in a veterinary laboratory before opening a restaurant, also had taste in mind when he decided he needed his own pigs.
“The pork we were serving our clients was dry. It had no juices, no flavour. Industrial products just aren't edible,” he said.
In 2007, he tried raising two “Large Whites”, a pig that looks just like the ones in children's books. But they couldn't stand either the severe winters or hot summers on the slopes, 600 metres above sea level. So he turned to the ProSpecieRara Centre in Geneva, whose mission is to save endangered animal and vegetable species, where he discovered the Mangalitza.
First bred by Hungarians in the early 19th century, the animal is actually half wild boar, which accounts for the coat of coarse hair that insulates it from both heat and cold.
More crucial for gourmets, the animal has two fewer chromosomes than more popular breeds, which Bluntzer says results in much bigger stores of fat rich in Omega 3 and low in cholesterol.
'Refresh the image'
But it takes 18 months for a Mangalitza to reach maturity at 80 to 100 kilos, compared with just four to six months for most pigs. They also have smaller litters, a factor which contributed to them virtually disappearing in the years after World War 2.
Guidet bought two Mangalitzas in 2008, and then a few more, and now has around 80 white, blond or black-and-white pigs eating corn, chestnuts and other foodstuffs while rooting their snouts into the ground.
For the past year and a half, Bluntzer has been buying one a week for preparing hams and roasts as well as more elaborate fare like gambette, or rolled pork shoulder.
“We're breaking even but not making a profit,” said Guidet. “What motivates me is making the best pig in the area — that's the challenge.”
More than 60 percent of the meat consists of succulent fat marbled throughout, deepening its flavour and making additional butter or oil unnecessary when cooking.
“This pig, I compare it to Wagyu beef with its marbled flesh: it's going to seep out, but it's the good kind of fat,” Bluntzer said.
But the prize comes at a price, with Mangalitza products costing nearly twice as much as those made with traditional pork.
Bluntzer has been organising tastings at the Sibilia stall in Lyon's storied Paul Bocuse market. He plans to start making dried saucissons next year, and possibly a cured ham aged 18 to 24 months, similar to Italy's San Daniele.
More broadly, his goal is to revive and spread appreciation for a French culinary heritage which can feel a bit too old-fashioned for younger generations.
“It's also good to refresh the image of charcuterie,” he said.
By AFP's Nicole Deshayes