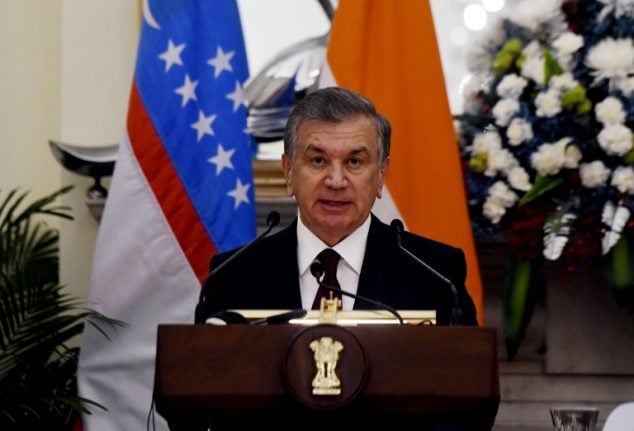 Uzbek President Shavkat Mirziyoyev speaks during an official state visit to India earlier this week. Photo: MONEY SHARMA / AFP
Uzbek President Shavkat Mirziyoyev's visit to Paris Monday and Tuesday will be his first to Europe following a trip to the United States where he met with President Donald Trump in May.
The high-profile visits are seen as rewards for the Central Asian country's steps towards more openness following the death of Mirziyoyev's long-reigning authoritarian predecessor Islam Karimov in 2016.
An Uzbek foreign ministry spokesman told AFP that the visa waiver for French citizens covers a period of 30 days and came into force on Friday. He said that France is the first EU member whose nationals would be able to benefit from the visa waiver.
The former Soviet republic of 32 million people is seeking to improve its ties with the West as part of Mirziyoyev's drive to attract foreign investment after decades of isolation.
Uzbekistan, which is highly dependent on commodity exports and suffers from deep poverty in its provinces, has also made developing tourism a priority, undoing a number of repressive policies hampering the sector.
Among the restrictions scrapped was a ban on photography in the capital Tashkent's ornate metro stations which had seen unsuspecting tourists detained by police in the past.
In December 2016, an executive order eased or cancelled visa requirements for 27 developed countries but was promptly reversed a month later — before actually coming into force — reportedly due to security fears.
Uzbekistan offers visa-free entry to nationals of Turkey, Israel, Indonesia, South Korea, Malaysia, Singapore, and Japan, in addition to long-standing reciprocal visa-free entry for citizens of most former Soviet countries.
Url copied to clipboard!