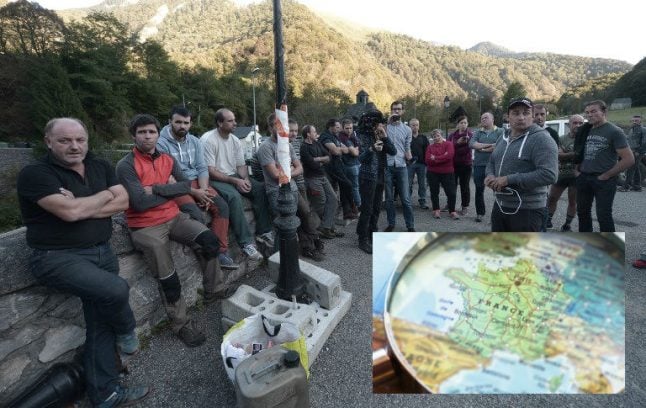 French farmers in the Pyrenees have "declared war". Photo: AFP

French farmers in the Pyrenees have “declared war” over the arrival of two Slovenian bears.

About 100 farmers, angry at losing their sheep and other livestock to the 40 bears currently roaming the mountain range, took up position late on Wednesday on the RN 134 route near Sarrance.

But their blockade may well have been in vain: on Thursday morning two helicopters, believed to be carrying the new bears, flew over their heads to delivery their cargo.

The picture below taken in Sarrance in the French Pyrenees shows the words “War is declared” painted on the road. The two new animals are part of a 10-year “Bear Plan” to increase their numbers to some 50 sexually mature bears.

Some 40 brown bears currently live the range between France and Spain after France began importing them from Slovenia in 1996 after the native population had been hunted to near-extinction.

In the French city of Brest two butchers have become the latest to be attacked in a growing wave of vandalism carried out by vegan militants.

The two shops were daubed with slogans including “Stop massacring animals.”

Incidents of vandalism and intimidation have reached such a level that the country's butchers' confederation, representing 18,000 businesses, sounded the alarm publicly in June and asked the government for protection.

“Since the start of the year, we've seen 17 butcher shop windows destroyed and dozens of acts of vandalism,” said Jean-Francois Guihard, head of the CFBCT confederation.

The French parliament has given the green light to the government to sell off its majority shareholding, worth nearly 10 billion euros, in the company that runs Paris airports.

The Assemblée Nationale voted in the early hours of Thursday to let the state sell all or part of its 50.6 percent stake in Aeroports de Paris, the group which runs the French capital's three airports – Orly, Charles De Gaulle (CDG), and Le Bourget.

The vote overturned a law which obliged the state to maintain its majority in the company.

Passengers who have ranked Orly and CDG airports among the worst in Europe will no doubt be hoping that any privatisation will improve their all-round experience of travelling through the two hubs.

Golfers have turned out in their dozens on the French seaside resort of Olonne-sur-Mer to fix the damage wreaked by rampaging wild boar on the greens of their local course.

“We have always had this type of attack at this time of year but never on this scale,” said the golf course director Laurent Geslin.

Around 1,000 square metres were damaged this week by the foraging animals. Some 40 golfers have turned out to help fix the greens and let play get back in swing.

And it's not just golfers who have a problem with wild boars in France right now. Farmers across the country have called on the government to take measures to compensate them as the animals tear up their fields and ruin their livelihoods.

The student accommodation crisis in Bordeaux has led a local university teacher to publicly call on authorities to step in and resolve the issue.

“I am sick of seeing my young students arrive in class exhausted because they have had to get up at 4 am (and commute as they live so far away),” he said.

Last month a student group pitched tents by a tram stop in Bordeaux and mockingly advertised them as accommodation to highlight the crisis.

Bordeaux University has sent an email to all its staff requesting that some of them offer lodgings to students.

The town of Vendin-le-Vieil near Lille has become home to France’s best-known criminal, jailbreak artist Redoine Faid, who on Thursday moved into one of the country’s most secure prisons.

Faid, who has said his life of crime was inspired by blockbusters such as “Scarface” and “Reservoir Dogs,” in July pulled off a spectacular helicopter jailbreak from a high-security prison near Paris.

He was recaptured this week north of Paris and was later taken to the jail in Vendin-le-Vieil, where he was placed in solitary confinement as he awaits trial.

The three-year-old jail is home to some of France’s most violent and troublesome prisoners.