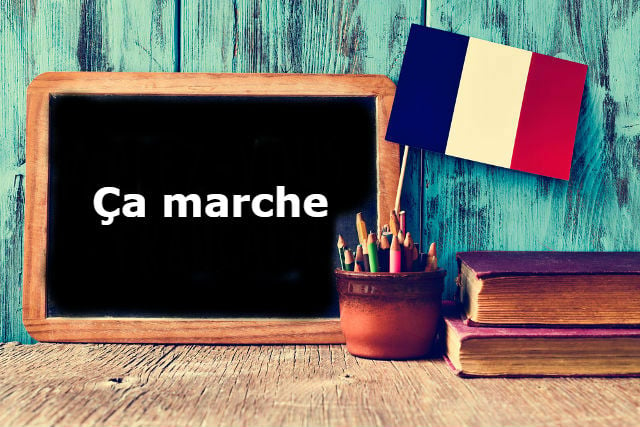 Why have we chosen ça marche?

This is one of the most commonly used expressions in French and you will hear it everywhere in general conversation.

And you will also hear it restaurants and bars when you've finished placing your order.

But, like other expressions we've looked at, it's one that isn't always taught in French classes.

Ça marche pronounced 'sa marsh' literally means 'that runs' or 'that works' which is why you'd be forgiven for not having a clue what it meant the first time you heard it.

In conversation, it means a few different things.

In everyday conversation it conveys the meaning of 'Ok, that works', 'that's fine', 'that works for me' and 'Ok, great!'.

You'll also hear it said all the time by waiters when you've finished ordering. In this context it means 'Coming up' or 'Coming right up'.

You can also use it as a question. So, by saying to someone 'Ça marche?' you're asking them 'Does that work for you?' or 'Is that ok for you?'.

Similarly if you want to say something doesn't work, you can say: non, ça ne marche pas (no, that doesn't work).

Sometimes you'll hear it used as part of the expression: ça marche comme sur des roulettes (it runs like clockwork).

In some cases, you'd be able to get away with d'accord! (ok!) but there isn't an exact equivalent that is quite as versatile as ça marche.

Alors, tu viens m'aider à déménager samedi? – Ça marche! – So, are you coming to help me move on Saturday? – That works!

(The example above comes from wordreference.com)