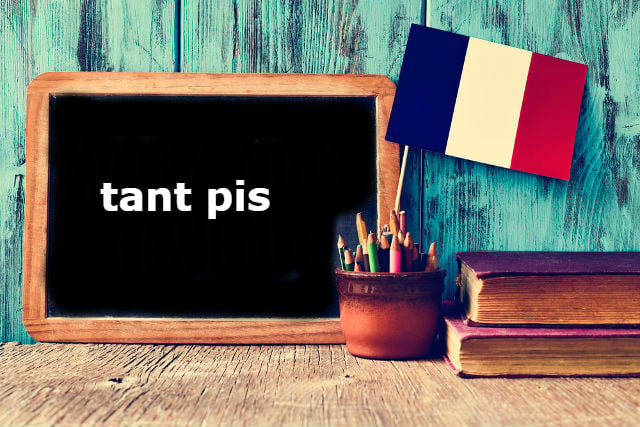 Why did we choose tant pis?

It's a expression that you'll hear frequently used in everyday conversation. On top of that, it's one that's almost impossible to guess the meaning of and sometimes it's not even clear which context to use it in because you'll hear it said in such a variety of tones. And you need to know how to pronounce it.

Literally speaking, tant pis means 'so much the worse'.

The reason why it can be said in different tones depending on the situation is that it can mean something fairly mild like 'oh well' but it can also mean 'tough' or 'tough luck'.

It can express a disappointed resignation and it can also be an expression that is full of accusation.
When used in the most extreme sense, the English equivalent of tant pis would be an angry 'too damn bad' or 'tough'.
But most commonly, you'll see it said with a casual shrug and a smile to mean 'oh well' or never mind'.
That means that it's important to be comfortable you know how to use it properly before you try it out, in case you end up sounding more rude than you meant to.
It's pronounced more like “ton pee” that tant pis, but definitely has nothing to do with urine.

A synonym in French could be c'est dommage, or quel dommage (what a shame) and  if something disappointing or sad has happened a more appropriate synonym would be c'est dur (that's hard).

Si ça ne t'intéresse pas, tant pis pour toi, je le proposerai à quelqu'un d'autre. – If it doesn't interest you, too bad for you, I'll suggest it to someone else.

(The above two examples are from wordreference.com)