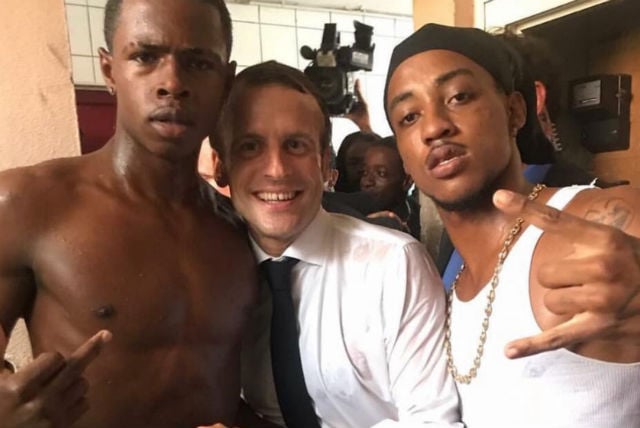 It's a shot the French president, whose ratings are at an all-time low, could really have done without.
In the photo taken on Sunday, Emmanuel Macron is seen between two bare-chested young men wearing bandanas on their heads. One of them is giving the middle finger to the camera.
The shot was taken during the president's visit to Saint Martin, a year after a hurricane devastated the French Caribbean island. Macron, followed by a host of photographers, was walking through the streets, meeting locals and talking to them about how they are rebuilding their lives after the tragedy.
When heavy rain started battering down, the president unexpectedly decided to take shelter in a block of social housing flats.
This could have been a good opportunity for Macron, who is struggling to shed his reputation as an arrogant leader removed from his people, to prove his critics wrong.
He met a family, and one man told him he had just come out of prison. In a firm manner which the president has been criticised for using lately in his interactions with the public, he told the former convict not to repeat the same mistakes.
“Don't make any more mistakes, will you? Your mother deserves more than this. Stop messing around, think of your mother. Now go and rebuild the island,” Macron told the former convict and hugged him afterwards, which left the young man's mother in tears.
A photo was then taken of the president, smiling next to the young man, who is giving the middle finger.
The man posted it on his Instagram account with the caption “Even the president feels safe around us in the Hood French quarter”, which it seems was not intended to be offensive in any way.
But the offending shot was then picked up on Twitter, setting off a flurry of reactions.
“We cannot even find words to express our outrage. France doesn't deserve this. It's unforgivable!,” wrote Marine Le Pen, head of the far-right Rassemblement National, formely the National Front.

Others called the photo 'belittling' for a president.

Macron was quick to defend himself, saying he loved every child of the République, no matter where they came from.
“What made it possible for me to fight and win against Marine le Pen and for me to be here today, is that I love every child of the republic, regardless of the mistakes they made,” he told reporters. “I am the president of the Republic, and I won't leave ever leave the people out.”.
But it remains to be seen whether photo opps like this will be enough to save the president's image.
READ ALSO: 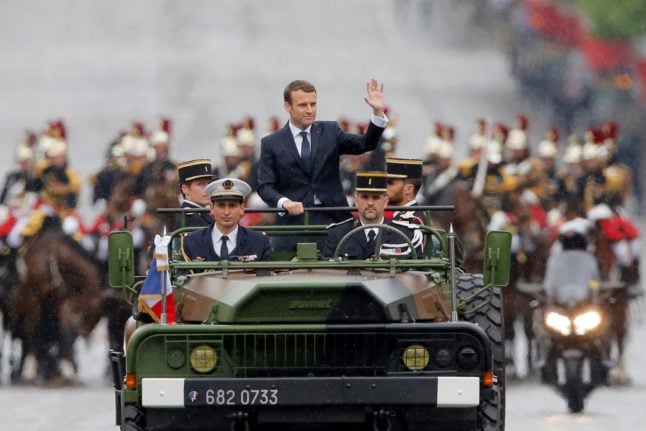