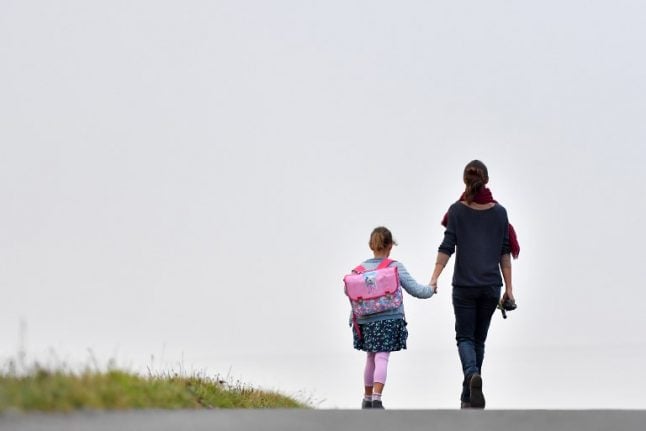 Photo: AFP
Childcare benefits
The CMG childcare allowance, given to parents who use alternative types of childcare such as nannies or nanny shares, will increase by 30 percent for single parent households with children under the age of 6.
It will go up by a maximum of €250 monthly, with a total of 78,000 parents set to benefit from this new raise.
It is calculated based on the how many children you have, income and type of childcare used.
Gas prices
From October 1st, regulated gas prices will rise on average by 3.25 percent this month.
For those who use gas for cooking, prices will go up by 1 percent and for households who use gas for heating, it will rise by 3.3 percent. Those who use it for both will see an increase of 2 percent.
Gas prices have been rising steadily for the past 6 months. They went up by 0.9 percent in September and by 0.2 percent in August. Photo: AFP
Minimum wage
The minimum wage after tax will increase to €7.83 euros or €1.188 monthly.
Unemployment contributions
Employees in the private sector will no longer have to pay unemployment contributions. This means that from now on, there will no longer be a line related to the “assurance chômage” on their payslips.
This same contribution was already reduced in January from 2.40 percent to 0.95 percent, but it has now been scrapped altogether.
So for example, people earning the minimum wage (Smic) will see a €15 increase in their monthly wage and those earning €3,000 before tax will earn an extra €28.50 monthly.
Social benefits
The 'prime d'activité', an allowance handed out by the French Family Benefits Fund, the CAF, will increase by €20 this month.
This poverty allowance is given to people over the age of 18 who are unemployed or on low incomes to help them find work or boost their income.
The allowance is set to increase gradually until 2021 to €80 monthly. Photo: AFP
Taxes
Council tax (taxe d'habitation in French), one of two property taxes in France, will decrease by 30 percent for 80 percent of households on their main residence.
The deadline for paying this local property tax is November 15th and November 20th if you are paying online.
The French president has pledged to get rid of the tax all together for all taxpayers' main residence by 2021.
To work out how much you need to pay, go here: impot.gouv.fr.
Petrol pumps
From October 12th, different types of fuel will be labelled slightly differently. For example, the unleaded fuel called 'sans-plomb 95-E10' will just be called E10.
New symbols will also be introduced. Circles, squares and diamonds will be used to help customers differentiate between petrol, diesel and gas more easily.