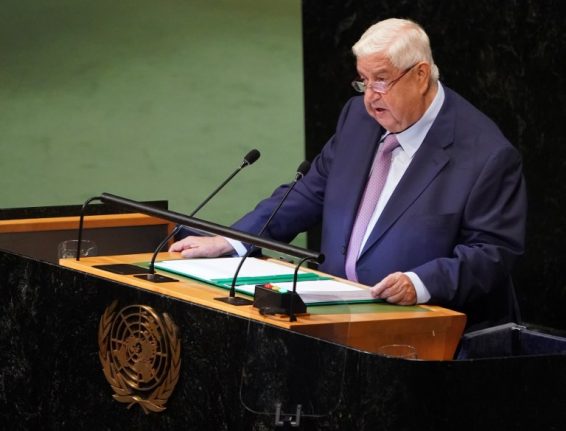 Syrian Foreign Minister Walid Al-Moualem addresses the 73rd session of the General Assembly at the United Nations in New York on Saturday. PHOTO: DON EMMERT / AFP
Addressing the UN General Assembly, Foreign Minister Walid al-Moualem also called on Syrian refugees to come home, even though the country's war is now in its eighth year.
Moualem, who also serves as deputy prime minister, said the foreign forces were on Syrian soil illegally, under the pretext of fighting terrorism, and “will be dealt with accordingly.”
“They must withdraw immediately and without any conditions,” he told the assembly.
Moualem insisted that the “war on terror is almost over” in Syria, where more than 360,000 people have died since 2011, with millions more uprooted from their homes.
He said Damascus would continue “fighting this sacred battle until we purge all Syrian territories” of both terror groups and “any illegal foreign presence.”
The United States has some 2,000 troops in Syria, mainly training and advising both Kurdish forces and Syrian Arabs opposed to President Bashar al-Assad.
France has more than 1,000 troops on the ground in the war-wracked country.
Scaring refugees
On the issue of refugees, Moualem said the conditions were fine for them to return, and he blamed “some western countries” for “spreading irrational fears” that prompted refugees to stay away.
“We have called upon the international community and humanitarian organizations to facilitate these returns,” he said. “They are politicizing what should be a purely humanitarian issue.”
The United States and the European Union have warned that there will be no reconstruction aid for Syria until there is a political agreement between Assad and the opposition to end the war.
UN diplomats say a recent agreement between Russia and Turkey to set up a buffer zone in the last major rebel stronghold of Idlib has created an opportunity to press ahead with political talks. The Russian-Turkish deal averted a large-scale assault by Russian-backed Syrian forces on the province, where three million people live.
Moualem however stressed that the agreement had “clear deadlines” and expressed hope that military action will target jihadists including fighters from the Al-Qaeda-linked Nusra Front, who “will be eradicated.”
UN envoy Staffan de Mistura is hoping to soon convene the first meetings of a new committee comprised of government and opposition members to draft a post-war constitution for Syria and pave the way to elections.
Moualem laid out conditions for the Syrian government's participation in the committee, saying the panel's work should be restricted “to reviewing the articles of the current constitution,” and warned against interference.