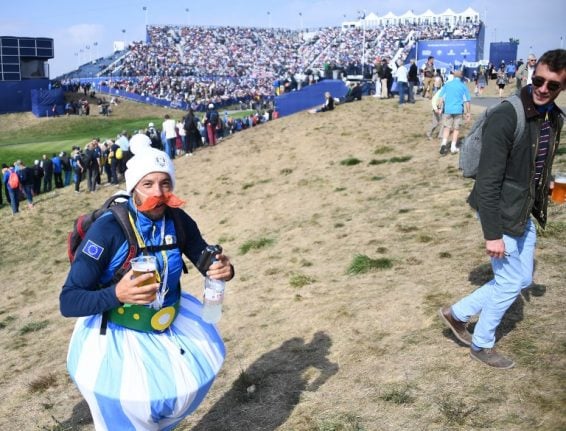 The French often like to think they're different and whether not that's true, they certainly seem to stand out when it comes to golf and their complete indifference to the sport.

The Ryder Cup is the world's most popular sports tournament after the Olympic games and the football World cup, and it is taking place at Saint-Quentin-En-Yvelines just outside Paris from September 28-30th.

It's only the second time in the cup's history that it is being held in continental Europe. Tiger Woods, golf's one-time golden boy will be playing in the tournament for the first time in six years.

On paper then, the 42nd Ryder Cup is set to be a big event. But wandering around the streets of Paris, reading the news or going by general chat in the office, you'd be forgiven for thinking nothing was going on at all.

For a start, French people aren't really into golf. For instance, how many of them know who Arnaud Massy is? Very few, yet this French man was exceptional. He is the only French person to win a major golf tournament in …1907! There's no chance of that happening again this weekend as no French players have qualified.

Yet French people do play golf. The French golf federation (FFG) counts 410 000 members, less than the number of registered players for football, rugby, judo or handball but more than that of the popular national pass time, pétanque.

One of the reasons cited for the French lack of interest when it comes to golf this is the lack of available or affordable golf courses in France. The sport is perceived as being too expensive and elitist, played in wealthy business circles. Many people feel it is too time-consuming as golf courses are often far away from people's homes.

The FFG, which raised 36 million euros towards the organising of the Ryder Cup, hopes this tournament will change French perceptions towards the game.

When it won the bid to host this year's Ryder Cup in France in 2011, the Federation vowed to make the game more popular. It hoped to boost membership to 700,000 (and failed) and has been building smaller golf courses in French cities to encourage more people to play. The organisation also pushed for the game to be played in schools.

But it's an uphill struggle. A recent Odoxa poll showed that only 48 percent of the French had heard of the Ryder Cup and that only 20% said they would take an interest.

The FFG will be hoping they'll change their minds this weekend.