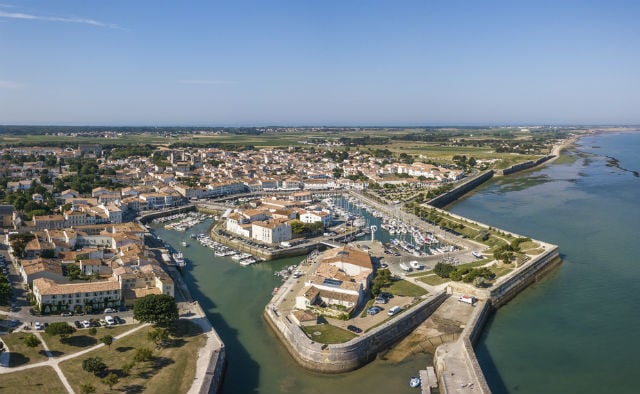 1Tomm/Depositphotos
Where is it?
Ile de Ré is an island north of La Rochelle in the Charente-Maritime department in the south west of France.
It has a summer population of approximately 220,000 and an off-season population of just 20,000. Google maps
How to get there
The Paris high-speed train (TGV) trip takes just 3 hours, and then taxis or buses can be taken over the bridge, which is about 3 km long.
You could also take a 45-minute flight from Paris to La Rochelle airport which is 5 minutes from the bridge, assuming there's no traffic delay. It can also be easily reached by bicycle and car.
And if you're combining it with a trip to Bordeaux, it's just a two-hour drive away. La Flotte, Ile de Ré Photo: Depositphotos
Why go?
Ile de Ré feels a little wild and unspoiled and boasts some of the most beautiful and charming fishing villages I have ever seen in France.
Though enjoyed by French celebrities and American stars like Johnny Depp and Katie Perry, this secret little corner of the Atlantic coast feels far removed from the tourist frenzy of bigger commercial beach regions such as Arcachon further south.
With its mix of rustic pine forests, gentle dunes and long beaches, not to mention the picture perfect village squares and cafes, it feels a little like a step back in time.
And at the moment there's no worry that Ile de Ré will lose its rustic charm, due to the rigorous regulations in place, with building work severely curtailed and restrictions limiting who can build what. Photo: Depositphotos
When to go
Like most touristy areas of coastal France it is always noticeable when the summer surge dissipates.
In the off-season oyster farming and salt harvesting routines return to normal and as the Parisians return home restaurants can be booked once more without long delays and in general the laid-back, other worldliness of this secluded corner can be properly enjoyed.
On top of that, temperatures stay upwards of 25 degrees across the Atlantic south west well into late September and early October.
If you think there is a place we should include in our “One place to visit in France this weekend” series email me at [email protected] following the same Q&A format as above.
READ ALSO: