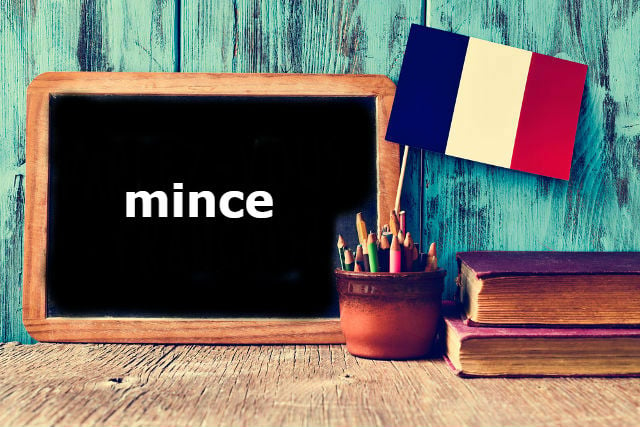 Why have we chosen mince?

Mince is one of the many tricky false friends that you come across in French and one that is used a lot in everyday conversation.

Mince means slim, slender or thin in the physical sense (for people and objects) but it also has an alternative euphemistic usage.

Mince! is shouted out by French speakers who want to stop themselves from using the gros mot (swear word) merde. In the same way as English speakers bite their lip and say “ssssugar!” or “ssshoot!” rather than yelling “shit!”, or Germans say the just as harsh-sounding “Scheibenkleister” rather than screaming “Scheisse!”.

According to Wordreference, you also have at your disposal the equally mild Mince alors!, used in a similar way to zut! to express surprise like in British English 'Blimey!', Aussie English 'Crikey!' or American English 'Holy cow!'.

There’s also the very handy expression ce n’est pas une mince affaire which translates as 'it’s no mean feat' or 'it’s no trivial matter', such as with the headline below: “giving birth during the academic term, no trivial matter”.

There's also the expression mince espoir, which means a 'slim chance', used in the headline below (Hulot's Resignation: Slim chance of an 'electric shock' for the green movement).

In a similar vein mince can be used as an adjective to refer to something meager or poor, such as Vince a obtenu de minces résultats pour un tel effort (Vince got poor marks considering how much effort he put in).

You can also talk about “a family of low financial means” as “une famille de mince revenus”, to define something or someone as scant or meager in terms of wealth.

Alternative euphemisms include miel and mercredi.

READ ALSO:
For more French Expressions and French Words of the Day you can CLICK HERE to see our full list