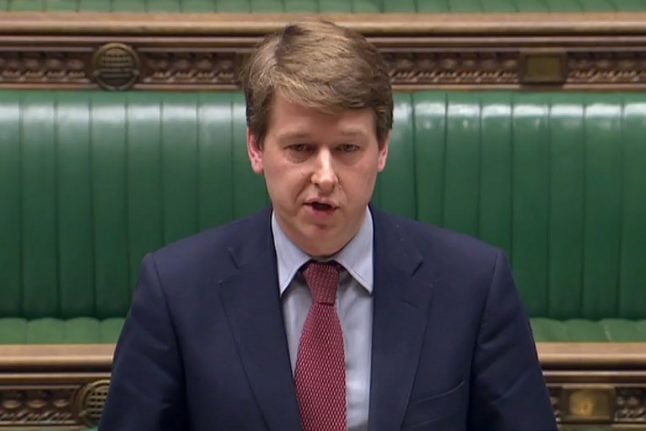 Walker the parliamentary under secretary from the Department of Exiting the EU met with various representatives of British groups for a round table meeting in Paris on Thursday lunchtime.

Following the meeting, which was described as “constructive” by one campaign group, Walker said the ball was now in France's court and urged Paris to take action and give Brits the reassurances they need as the threat of a no-deal Brexit looms large.

In a statement given to The Local the junior Brexit minister said: “We know that citizens' rights is a source of concern for British citizens across Europe. I have met with many groups during foreign visits and I know the ambassador Ed Llewellyn and his team have held over 20 meetings across France in recent months to keep British citizens up to date and feed concerns back to London.”

“The PM has been clear, in the event of a no deal we will respect the rights of the 3 million EU citizens in the UK.

“It is now time for member states to offer the same reassurance to UK nationals in their countries. This is a point I have pressed home with the French government.”

But campaign groups like British in Europe are demanding that rather than France acting independently, London and the EU should instead agree to ring fence the the citizen' right part of the draft withdrawal agreement drawn up last December.

Brits in France and the EU have grown increasingly angry and anxious in recent weeks and months as negotiations between Brussels and London have in the words of UK PM Theresa May reached an “impasse.”

The British Prime Minster infuriated campaigners over the rights of Britons living in the EU last week when during a combative speech following the Salzburg EU summit she failed to even mention the rights of the 1.2 million British citizens living across the EU.

Reacting to May's statement Kalba Meadows from the Remain in France Together (RIFT) campaign group told The Local: “It's completely unacceptable that she made no mention at all of the 1.2 million British citizens living in the EU – not even an acknowledgement that we exist.

“And frankly, to do this almost in the same sentence as threatening a no deal is nothing short of disgraceful.

“We truly are the forgotten 1.2 million and closer than ever to being the collateral damage of Brexit.”

The junior Brexit minister was told on Thursday by Brian Robinson from Brexpats Hear Our Voice how much upset May had caused.

Robinson described Thursday's meeting as “constructive” and left with the feeling that the concerns of Britons in the EU were finally being heard.

But doubts remain about whether anything concrete will come of it.

Robin Baker, who represented the British Community Committee of France at the meeting told The Local: “People were satisfied that they were able to air their concerns but they are less satisfied that the minister will be able to do anything about them.

“The minister told us clearly that he was a 'Remainer' and that he had campaigned against Brexit but that his concern now was getting the best possible Brexit and he assured us that that included the interests of British expats in the EU.

“He is of course limited because what happens is in the hands of foreign governments.”

On the minister's menu was the growing list of concerns felt by Brits in France who have been left feeling more and more insecure in recent weeks given that negotiations between London and Brussels have reached impasse and the likelihood that the UK could crash out of the EU without a deal grows ever more likely.

Top of the list was the ongoing problems UK citizens are having trying to obtain a carte de séjour residency permit, which they are being advised to do by both French and British authorities.

While some in France have obtained their cards without any issues, many continue to report problems at certain prefectures whether it's being given different lists of documents to provide, lengthy waiting times or simply being told, wrongly, that they don't need one.

Representatives at the meeting also raised concerns over the potential loss of health cover after Brexit and the longstanding gripe that many are still barred from voting in the UK because of the 15-year voting rule.

Despite repeated promises by the British Conservative government to scrap the rule that bars British nationals from voting in elections and referendums if they have been out of the country for longer than 15 years, nothing has been done.

“Theresa May always says the British people voted to leave the EU but most of the people I know here couldn't vote because of the 15-year rule. So she's saying they are not part of Britain,” said the British Community Committee's Baker, who said many Brits are suffering due to the 12 percent fall in the value of the pound against the Euro since Brexit.

Officials at the British Embassy in Paris are adamant that they are listening to the concerns of Britons in France. The embassy recently announced two new outreach meetings in Bordeaux and Toulouse next month when the ambassador or a high ranking official will meet with Britons to try to ease their growing worry.

They have also been liaising with France's interior minister and different prefectures around France to smooth over any issues with the handling of carte de séjour requests.

“There is more to do but we have significantly stepped up our work to support Britons,” a spokesman for the embassy told The Local on Thursday.

“There are open meetings all around the country, a new regular newsletter, updates on our website and through social media and we are working with the French Ministry of Interior.

“This will be our top priority for the foreseeable future – as it should be.”

You can visit the British Embassy's Facebook page by clicking here.