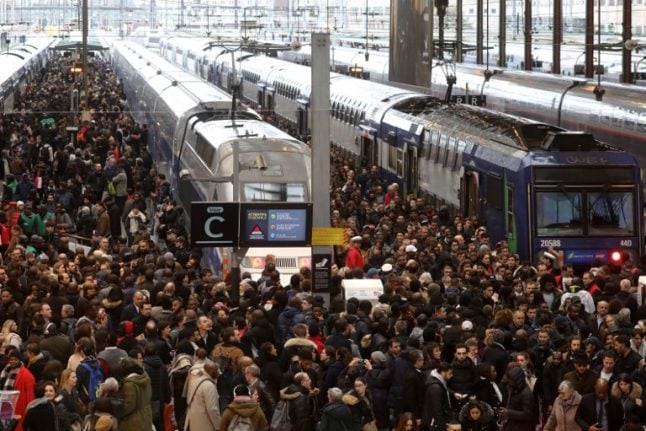 Photo: AFP Despite the occasional travel chaos caused by strikes,the Paris transport system is something to cherish.

But the strikes, you say. But the constant construction, you add. To which I respond: compared to what I’ve seen, it’s better by leaps and bounds. And it’s much more affordable than any public transit system I had access to before.

I’m from New York City, which means I have a lifelong aversion to driving and will always opt for public transit. In the past 15 years, I’ve also lived in London, Montreal, Washington D.C., and Halifax, Nova Scotia, so I’ve had plenty of opportunity in my 37 years to experience different types of public transportation systems and how well they’re maintained.

Based on these metrics, Ile-de-France’s systems blow me away.

We moved to Saint-Ouen l’Aumone in June, following two blistering years in the UK, because we missed living in a French-speaking area. In the UK, we were first based in Cambridge, then in Hitchin, a town 20 minutes north of London. From Hitchin, a monthly train pass combined with a London Tube/bus ticket cost a whopping £550 per month.

But that wasn’t the worst part. The worst part was spending that egregious amount every month (a full quarter of my post-tax pay cheque), and being forced to stand for the entire journey. Commuters were rammed into train cars at 250% capacity due to the increasing number of people moving into the London burbs and the refusal of the privatised train system to accommodate this change with more frequently running trains.

A lot of the time, the trains weren’t even running.

It wasn’t unusual to stand beneath the departure boards at Kings Cross, desperately searching for a train that was leaving on schedule and that would take me home. Cancellations and delays were par for the course, and often turned my 20-minute commute into an hours-long ordeal.

Here in Ile-de-France, I see nothing of the chaos of the UK transit system. Trains run to Paris on a consistent basis, and system-wide shutdowns or delays have not been frequent, even counting the days when rail staff went on strike. The trains are clean, service is frequent, and seating is plentiful.

And after UK prices for transport, the €75 I pay every month for transit in the Paris region feels nothing short of a miracle.

Caveat: I’m a freelance journalist, so I normally don’t ride the rails at normal commuter times. My partner avoids rush hour traffic by biking 15 minutes to his office every day. It may be easier to view the transit system favourably when you don’t have to contend with rush hour madness.

But when I think of the daily subway chaos in New York, and the continued groaning about train timetables in and around London, I’m confident my conclusion – that the Paris region is in much better shape – is not too far off the mark. Sure, I could do without the weekend travaux and the need to get on a bus when the rail tracks are under construction. Overall, I’m still impressed by the Ile-de-France network. The benefits of an accessible, functioning and affordable public transit system are clear for commuters. But it goes far beyond those who rely on it to get to work.

For new immigrants, this intricate system of bus and rail provides them a cheap and easy way to explore their new home.

Immigrating is expensive. Much of your electronic devices, from your furniture to your computer accessories, need to be replaced. New furniture needs to be bought. Steep administrative fees, to the immigration officials and to the health department, must be paid.

All these costs mean there’s very little money left over to investigate our new surroundings and find our new favourite places. Ile-de-France’s extensive and low-cost buses and trains help to introduce us to our new home, without draining our finances. And for that I’m profoundly grateful.

To be fair, all transit systems in major metropolitan areas are struggling to manage an influx in riders and the infrastructure decay. But so far, the Paris region’s approach to these, including staggered construction and a low cap on rider fares, has been by far the best.

Have you got something to say about France? Send us your stories, views and experiences to [email protected]