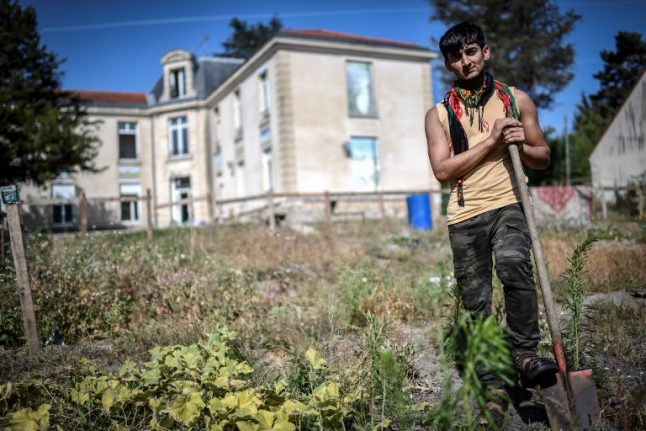 Afghan migrant Ahmadzi Gul, 19 poses at an Emmaüs Solidarity center on August 28, 2018 in Forges-les-Bains. Photo: AFP
The disused hospital earmarked for the project was firebombed, some 250 residents staged a protest and NGO workers assisting the group of Afghans had their car tyres slashed.
“At first people said we were terrorists… and that we were going to give hash to the children (in the school next door),” said Asif Qaderi, 23, who was part of the first group bussed to the leafy town 50 kilometres (31 miles) south of Paris.
But the fears expressed in the town of 4,000 — of home break-ins and girls at the school next to the centre being harassed — came to nought.
The 91 men, who had been sleeping on the streets of Paris, instead devoted their energy to restoring the neglected building, pursuing their asylum claims and learning French, guided by the Emmaus Solidarite housing charity.
They also raised chickens and sheep, dug a vegetable garden, built a football field and held barbecues that helped break the ice with the community. Afghan migrants, sheltered in a centre in Forges-Les-Bains, dance with local residents at a festival. Photo: AFP
'Caught in the middle'
But the centre is now being closed — a symbol of opposition in many parts of France, where 60 percent of people interviewed in a June poll said the country had “too many” migrants.
Local mayor Marie Lespert-Chabrier, who made the state promise to move the Afghans on after two years, is still smarting at being forced to take the foreigners in, leaving her “caught in the middle” between youths fleeing war and misery and a hostile population.
While admitting that the fears of the refuseniks proved unfounded, she is adamant that her town has done its bit for the migrants who have poured into Europe in the past three years.
France, which registered a record 100,000 asylum-seekers last year, received far fewer migrants than the likes of Germany or Sweden, with police regularly turning people back to their EU port of arrival — usually Italy.
Once in France, most head for the streets of Paris or Calais in the north, a jumping-off point for Britain. Afghan migrants gather at a refuge in Forges-Les Bains. Photo: AFP
Forges-les-Bains was one of dozens of towns selected to host migrants as part of a major relocation programme in 2016.
To Ahmadzi Gul, 19, it felt like a second home.
“Forges is a bit like a village in Afghanistan. It's quiet and the people are nice,” Gul, who was scarred by police violence on the migrant route in Bulgaria, said as he hoisted his belongings onto a truck bound for a shelter 30 kilometres away.
“We regret having to leave,” said Emmaus Solidarite's head Bruno Morel, for whom the centre demonstrated “that you can welcome migrants in a dignified manner, without causing any problems”.
No 'misty-eyed idealists'
A five-minute drive from Forges-les-Bains lies a town about half its size that has been hailed as a model of tolerance.
Bonnelles led the way in 2015 when it agreed to give 78 Syrian and Iraqi men shelter in a monastery.
With TV images at the time showing clashes between migrants and police at the Hungarian border, “there was a lot of concern” among residents, recalled the town's mayor of the last 23 years, Guy Poupart.
While calling on residents to show solidarity, he took care to neither demonize nor deify the newcomers. Afghan migrant Janzeb Khan poses at an Emmaüs Solidarity center in Forges-les-Bains. Photo: AFP
“These are humans, some of whom fled for their lives or lost loved ones.
But we did not take sides nor become misty-eyed idealists,” he said.
That approach paid off, with the monastery going on to host some 550 asylum-seekers for short periods — on average 90 young men of 14 different nationalities at any one time —  nearly all of whom praised by residents as engaging and polite.
“Nothing has changed, we don't see the refugees much,” said Sophie Derouin, co-owner of a hair salon, who had to brush up her school English to tend to new Afghan clients.
But even in Bonnelles, where migrants and local youths have struck up friendships around football and at least one asylum-seeker found work with a local company, some residents still oppose the foreigners' presence.
“That's enough. We have enough problems with our own homeless,” Derouin's business partner Isabelle Bobinet said, a sentiment echoed by Patrick Cassert,
owner of a cafe on the main street.
Caring for asylum-seekers “is costing France too much money,” he said.