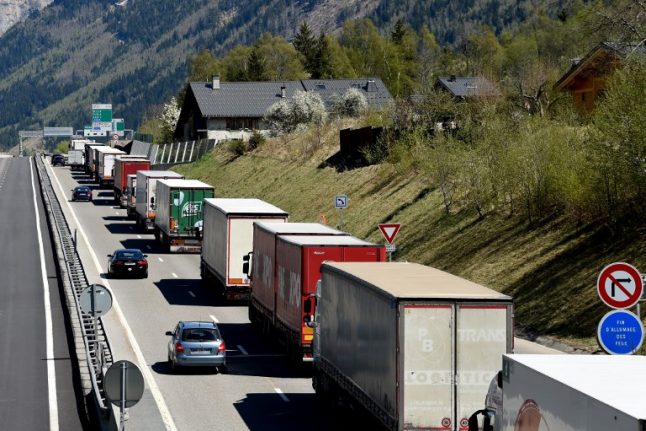 France has long mulled the idea of taxing foreign trucking companies and the new environment minister François de Rugy said on Sunday that he sees a tax disc (called a vignette in French) as the best solution.

Authorities in France are frustrated by the fact many trucks cross the country using the road network, often on their way to other countries such as Spain or Portugal to the west or Germany, Switzerland and Belgium to the east and Italy to the south.

They want these haulage companies to pay their way and help cover the cost of maintaining the roads. Their preferred method of doing so is to introduce a road tax disc that the companies would have to purchase to be able to use roads in France.

“We are working on a road tax disc to tax foreign trucks,” said de Rugy, who wants to target the trucks who just cross through the country without stopping.

“There are some trucks that don't even fill up with petrol so they don't even pay any fuel tax or tax to use the roads.”

French authorities have also talked in the past of wanting to force heavy goods vehicles onto the country's motorway network where they will be forced to pay tolls rather than allowing them to use the secondary road network.

“This is not just to say' we're going to tax the HGVs to be more environmentally friendly'. We need financial resources to invest in the road and rail network so we don't experience what happened in Genoa.”

De Rugy was referring to the bridge that collapsed in the Italian city in August which killing 43 people. The collapse has been blamed on poor maintenance and a lack of investment.

Rugy announced his plan on BFM TV on Sunday but the details remain vague and it's not clear whether French haulage companies would also have to purchase the vignette.

The French government is most likely to copy the model that exists in Switzerland, where truck drivers have to purchase an annual tax disc to be able to use the motorway and main road systems.

De Rugy said the new tax discs would likely come into force in 2019.

While French haulage companies are believed to be in favour of the move France might run into problems at a European level if they are judged to be penalising foreign companies.