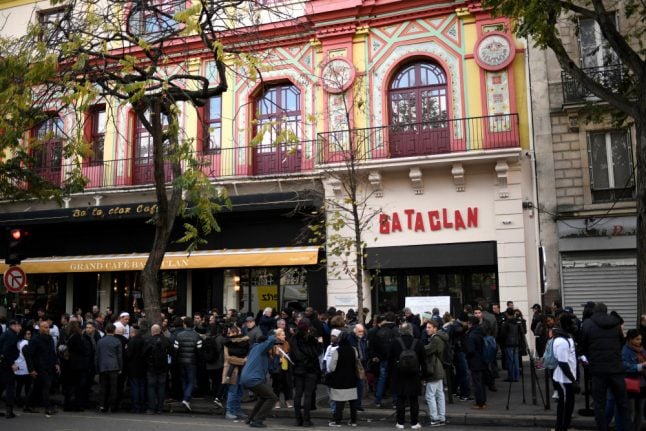 People stand in front of the Bataclan concert venue in November 2017 during ceremonies marking the second anniversary of the terror attacks. Photo: AFP

Medine, a French-born singer of Algerian descent, had drawn fire from right-wing politicians as well as some of the victims' families after announcing the shows at the historic concert hall.

Tickets quickly sold out when they went on sale a few weeks after Medine released an album featuring the song “Bataclan”, where he recounts years of dreaming he would one day play there.

Although he has denounced Islamic fundamentalism since the attacks, in which 130 people were killed and over 350 wounded, critics have latched onto songs such as “Don't Laik”, where he assails France's secular policies as discriminatory towards Muslims.

The song, released just a week before the jihadist massacre at the Charlie Hebdo newspaper in Paris in January 2015, includes lyrics calling for “crucifying secularists” and putting “fatwas on the heads of these idiots”.

In a statement the Bataclan said the concerts were cancelled “out of respect for the victims of the November 13th, 2015, attacks and their families.”

It said the goal was to “ease tensions”, while Medine posted on social media that he would play another Paris concert hall in February after making a “painful decision”.

“All I wanted to do was play the Bataclan,” he wrote, echoing the refrain of the song released this year.

Rightwing lawmakers said the concerts would have been a “sacrilege” to victims, with the far-right National Rally party organising an online petition for the concerts to be banned.

More recently far-right movements had been urging protests outside the Bataclan to disrupt the concerts set for October.

On Friday, Medine accused them of “exploiting and reviving the pain of the victims' families.”

The 35-year-old singer, who has also courted controversy with songs like “Jihad”, has compared himself to “a bomb disposal expert who has been mistaken for someone who plants them”.

He co-authored a 2012 book, “Don't Panik”, with a leading French academic which they said was an attempt to take the heat out of the French culture war over Islam.

Life for Paris, one of the main Bataclan victims' groups, had also denounced attempts to attack the rapper in their name, defending the concert hall's right to give its stage to whoever it wanted.

But Medine's critics were quick to claim victory Friday.

Marine Le Pen of the far-right National Rally called the cancellations “a victory for all the victims of Islamic terrorism.”

“This provocation did not belong in this venue, given its painful history,” she tweeted.

Many of Medine's fans, however, reacted angrily to the news.

“I hate this France which screams 'I am Charlie' in the name of liberty but which stops an artist from performing,” a Twitter user identified as HDG wrote, adding the hashtag “I am Medine”.