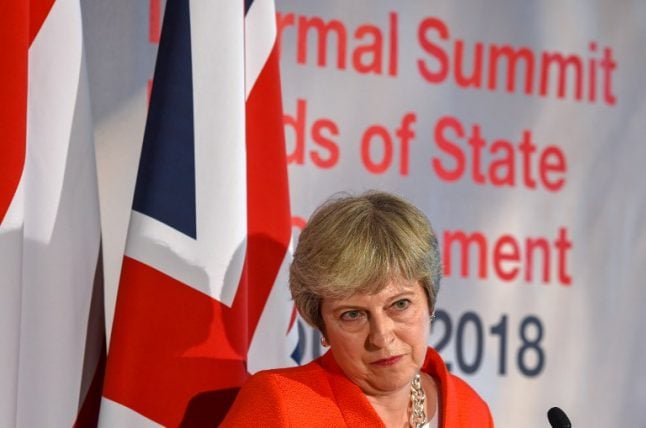 May told the Media in London on Friday that talks between Britain and the EU were at an “impasse”.

The Prime Minister gave her combative statement after returning from a bruising EU summit in Salzburg during which her latest Brexit plan, now referred to as the Chequers agreement, was effectively rubbished and rejected by EU leaders.

“Throughout this process I have treated the EU with nothing but respect. The UK expects the same… At this late stage in the negotiation, it is not acceptable to simply reject the other side's proposals without a detailed explanation and counter proposals.”

But it was May's threat to the EU that she will accept a no-deal Brexit if the EU does not accept her proposals that have angered Brits in France and Europe, plus the fact the PM made no reference at all of the 1.2 British nationals living around the EU.

READ ALSO: Brexit: It's time for Brits in France to prepare for the worst

May said: “No one wants a good deal more than me. But the EU should be clear. I will not overturn the result of the referendum. Nor will I break up the country.”

Reacting to May's statement Kalba Meadows from the Remain in France Together (RIFT) campaign group told The Local: “It's completely unacceptable that she made no mention at all of the 1.2 million British citizens living in the EU – not even an acknowledgement that we exist.

“And frankly, to do this almost in the same sentence as threatening a no deal is nothing short of disgraceful.

“We truly are the forgotten 1.2 million and closer than ever to being the collateral damage of Brexit.”

No mention of @britishineurope by May. We’re not even worth a reassuring line in a speech https://t.co/KT7U2dYuFA

.@faisalislam Thanks for being the first to draw attention to the omission of any mention of Brits in Europe from Theresa May's speech. Omitted from the speech, ignored by the rest of the media. We are the forgotten 1.2 million.

The British in Europe campaign group issued an angry open letter to May in which they too called May's statement “disgraceful”.

“You appear willing to take the UK out of the EU with a no deal and with no thought for your own nationals. This was a disgraceful and unacceptable omission on your part,” said the group's Chair Jane Golding.

“We are and we remain British citizens. You have obligations towards us and we expect you and your government to respect and honour those obligations.”

https://t.co/D9TZNP5dlU Our letter to @theresa_may following her statement this afternoon.

The only part of May's statement that was greeted positively was her vow to protect the rights of the three million EU nationals living in Britain in the event of a no-deal, a promise the Prime Minister has avoided making up to now.

It is hoped if London moves to protect those rights then other EU states will reciprocate and give reassurance to British citizens in those countries.

Brits living around Europe are increasingly edgy about the prospect of Britain crashing out of the EU without a deal.

While the French government is coming up with contingency plans to ensure British nationals already in France can gain residency in the event of a no-deal Brexit Brits are being told to apply for a carte de séjour permit as soon as possible to alleviate any stress further down the line.

They have been warned by the UK government that some of the knock on effects of a no-deal Brexit could be losing access to the British bank accounts, high credit card charges and their British driving licences no longer being valid.

Higher mobile phone charges and restrictions on passports were two other possible impacts of a no-deal.

The British in Europe campaign group has urged that the British government and Brussels take steps to guarantee the rights of UK citizens in Europe after Brexit.

The campaigners wrote to the two sides earlier this month demanding the two sides end the “extreme legal uncertainty” and the subsequent stress and anxiety for the three million EU nationals living in Britain and the 1.2 million Brits across the EU by guaranteeing the agreements on citizens' rights drawn up by the two sides last December.