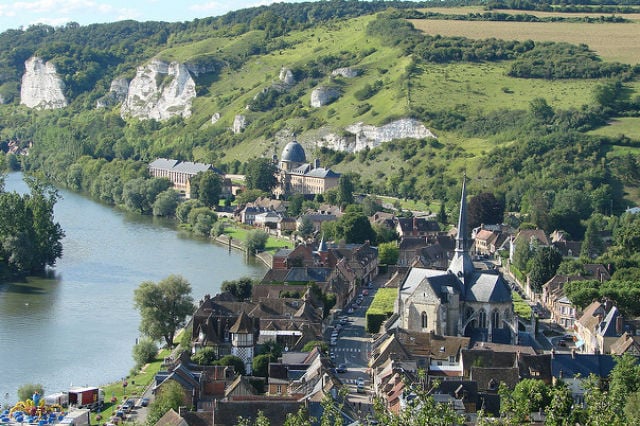 Photo: Allie_Caulfield/Flickr
Where is it?
Les Andelys is a town in the Eure department of the Normandy region in the north of France.
It is located 100 km from Paris and 40 km from Rouen and is made up of two main parts — Le Petit Andely, which is situated right on a spectacular bend on the River Seine, and Le Grand Andely. Google maps
How to get there
If you're travelling from Paris, like we were, you can take a train from Gare Saint Lazare to Gaillon Aubevoye which is on the route between the capital and Rouen.
From Gaillon Aubevoye, you can take a taxi which would take about 10 minutes but we decided to stretch our legs a little and walk the mostly picturesque route along the river.
It took around two and a half hours (a distance of 12.2 km) and combined extremely pretty hamlets with some spots that were more down-at-heel.
Alternatively, you can drive straight to Les Andelys, with the town located just off the A13 motorway. Photo: The Local
Why go?
We found Les Andelys to be the perfect relaxing weekend escape from the hustle and bustle of everyday life in Paris.
There are a good number of hotels and several well thought of restaurants to keep you busy during your stay and if you go out of season, like us, then you'll be able to enjoy this beautiful location without having to elbow other tourists out of the way.
The view down the River Seine from Le Petit Andely is nothing short of spectacular and we took the opportunity to make the most of it by sitting on the grassy bank alongside it with a couple of drinks.
You'll also find the stunning St. Savior church and a lively market on Saturday mornings in Le Grand Andely, with the walk between the two taking just 15 minutes.
For history enthusiasts Les Andelys is overlooked by an impressive medieval castle built under the orders of English King Richard the Lionheart called Château Gaillard (see below) and it took us about ten minutes to get up to it from the town.
And if you think the views from the river are good, those visible from the castle are breathtaking.
In short, it is a wonderful place to get an insight into small town French life with the bonus of an exceptional setting.
Les Andelys has also had its fair share of famous visitors in its past, including the author behind Sherlock Holmes, Arthur Conan Doyle and T.E Lawrence, also known as Lawrence of Arabia. Photo: Casper Moller/Flickr
When to go
We visited in September and were lucky with the weather. If you go in summer you'll find a lot more tourists with more boats travelling up the Seine from Paris to Rouen.
However, I honestly think that Les Andelys would be a good place to visit all year round as long as you don't mind wrapping up for a walk around the town before warming up over a coffee or glass of red wine.
Tips
We stayed in the charming Chaine d'Or hotel which overlooks the river and would highly recommend it.
Be sure to make reservations for lunch or dinner at the hotel restaurant before it gets booked up. Both the dining room and summer terrace have stunning views.
Order the menu and a bottle of wine and let the stresses of the working week melt away.
If you think there is a place we should include in our “One place to visit in France this weekend” series email me at [email protected] following the same Q&A format as above.