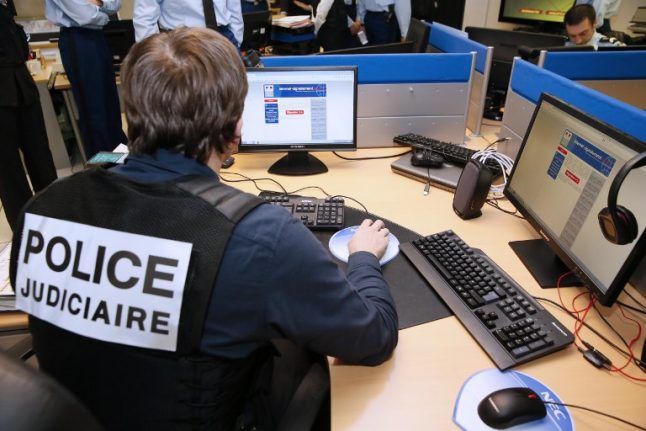 French police officers work at the headquarters of the Pharos reporting platform against cyber criminality. Photo: AFP
Prosecutors in Toulouse opened an inquiry late Wednesday for gang rape after the 19-year-old victim confirmed she was the woman in at least two videos posted first to Snapchat and then Twitter, a source close to the inquiry told AFP.
The videos of the attack prompted a wave of outrage on Twitter, with many users claiming to know the identities of the attackers, aged 25 to 30.
“We need calm and discretion,” the source said when asked about the reported identifications of the men.
The local Depeche du Midi newspaper reported that the rape occurred overnight Saturday in a parking lot in Balma, a residential suburb east of Toulouse.
Local police were alerted to the attack after the videos were flagged to France's national digital surveillance cell, and were already investigating Monday when a friend of the victim told them the woman's identity.
The victim herself then came forward after learning the videos were circulating on social media.
“The way they broke me, the way they humiliated me, nothing can relieve that. But the video, which will be shared, where you see my body… It's a vulnerability I'll have to bear my entire life,” she told a local radio station Tuesday.
Reports say the woman told police she had a hazy memory of the incident and suspects she may have been drugged.
The videos were deleted by the interior ministry's Pharos programme which deletes graphic and violent internet content, and police began urging people Monday not to share the images.
Videos of rapes have become an increasingly common problem online due to the spread of mobile phones and social media usage, with cases in the United States, Brazil and India causing outrage in recent years.