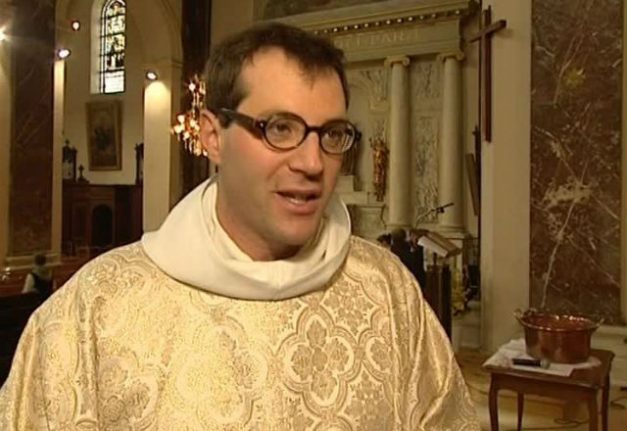 Screenshot/F3 Normandie
Jean-Baptiste Sebe killed himself Tuesday in the church north of Rouen amid allegations from a local mother that her grown-up daughter had been a victim of “indecent behaviour and sexual assault,” a police source said.
The initial complaint was made to the archbishop of Rouen, and “police were not notified prior to the suicide,” the source added, stressing that investigators remained “very cautious at this stage.”
Local prosecutor Etienne Thieffry confirmed that an investigation was underway into “the exact reasons for the suicide” at the Saint-Jean XXIII church.
“At this point, no complaint has been filed,” Thieffry said.
A spokesman for the Rouen diocese, Eric de la Bourdonnaye, told AFP he could “neither confirm nor deny these reports.”
The Catholic Church has been shaken by a string of paedophile scandals over the past 25 years.
It was rocked in August by a devastating US report on child sex abuse which accused more than 300 “predator” priests of abusing more than 1,000 minors over seven decades in the state of Pennsylvania.
The most senior French Catholic cleric to be caught up in scandal is Cardinal Philippe Barbarin, who is to go on trial in January for allegedly covering up for a priest accused of abusing boy scouts in the Lyon area in the 1980s.