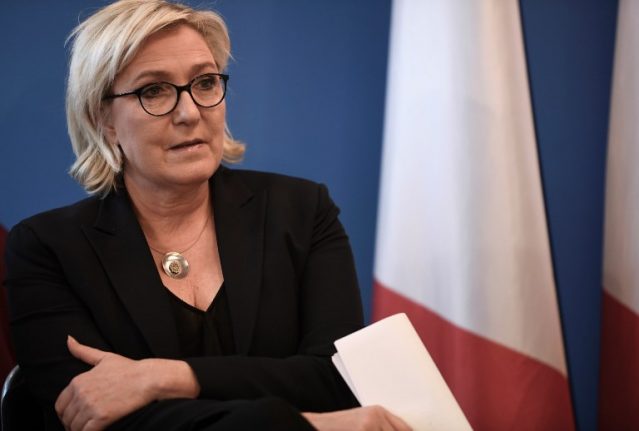 Le Pen, who is head of the former National Front party – now National Rally (Rassemblement National) revealed on Twitter her shock and anger at being ordered to undertake a psychiatric assessment.

The unusual summoning is in relation to Le Pen having tweeted out gruesome propaganda images from terror group Isis that showed the bodies of people having been executed by the so-called Islamic State.

In March Le Pen was charged with circulating “violent messages that incite terrorism or pornography or seriously harm human dignity” and that can be viewed by a minor.

And as part of their investigation it appears magistrates in Nanterre near Paris have ordered Le Pen to visit a psychiatrist for an expert assessment.

“I thought I had been through it all: well, no! For denouncing the horrors of Daesh (Isis) by tweets the “justice system” has referred me for a psychiatric assessment. How far will they go?!” she said on Thursday.

The order came from the district court in Nanterre and was dated September 11th.

Le Pen photographed and tweeted out the order with the words: “It's really incredible. This regime is really starting to worry me,” suggesting that the case was part of a government plot to discredit her.

The order calls for the tests to be carried out “as soon as possible” to establish whether she “is capable of understanding remarks and answering questions”.

Experts have told the French media that expert psychiatric tests are run of the mill for people charged with these kind of offences and have not specifically been ordered for Le Pen.

“The argument that this is harassment by the judiciary does not hold water. She is a political personality but this is not a political decision.”

But it doesn't look like Le Pen will be making an appointment with any psychiatrists.

“Of course I will not go to this psychiatric assessment and I will wait to see how the magistrate intends to force me,” she told BFM TV.

Marine Le Pen posted the Isis pictures just a few weeks after the Paris terror attacks in November 2015 in which 130 people were killed.

The images included a photo of the decapitated body of US journalist James Foley.

“Daesh is this!” Le Pen wrote in a caption, using an Arabic acronym for IS, in response to a TV journalist drawing a comparison between the extremists and the French far-right.

Le Pen later deleted the picture of Foley after a request from his family, saying she had been unaware of his identity.

“I am being charged for having condemned the horrors of Daesh,” Le Pen told AFP.

“In other countries this would have earned me a medal.”