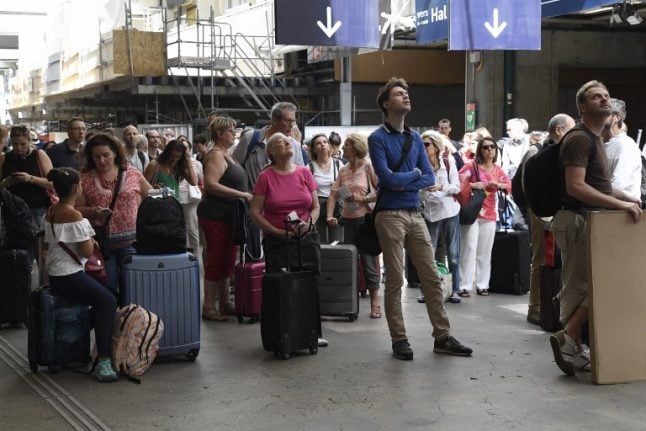 The alarming news was announced by the head of RTE (Reseau de Transport d'electricité) which manages the electricity supply to France's transport network.

François Brottes was asked to appear before senators to explain the cause of the major power outage that hit Paris Montparnasse station at the end of July and left rail transport crippled for days and ruined the holiday plans for tens of thousands of people.

Unfortunately Brottes was unable to explain the exact cause of the outage at Montparnasse, which followed a fire at an electrical centre near the capital, but did reveal that five mainline rail stations in total are at risk of suffering similar fate, so too is Orly airport in Paris.

The five stations are Gare de Lyon in Paris which serves the south of France, Rennes as well as the two train stations in the city of Lyon: Part Dieu and Perrache.

The fifth station is of course Gare Montparnasse in Paris which faces a repeat of July's travel chaos.

The RTE chief said the main problem was that the electrical supply to Gare Montparnasse and these other stations came from one source and if there was a problem at the source then it would result in a loss of power until the issue was resolved.

Paris's other main stations such as Gare du Nord or Gare St Lazare can benefit from other power sources if there is an outage, which in theory means the knock-on effect on rail traffic would be less. And it looks like passengers won't be given any guarantees that the “fragility” of these five stations and Paris Orly airport will be resolved any time soon.

Brottes said RTE was working with SNCF rail chiefs on the issue but that it could take “years” to put right due to the difficulty in finding the finance and also in convincing local authorities in Paris especially to agree to the installation of new electrical supply centres.

Aeroports de Paris, which runs Orly airport confirmed to Le Parisien newspaper that studies were being carried out to look into providing the airport with a second source of power in case of a major outage.

Responding to the alarming news centrist senator Hervé Maurey said: “We can see that our transport infrastructure is on its last legs. Successive governments have neglected things.”