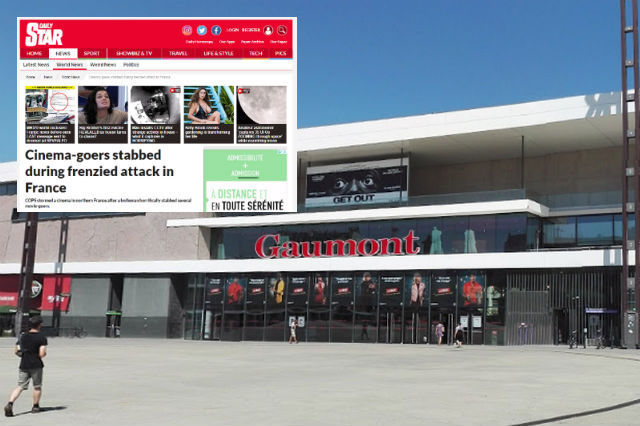 The headlines on the English language news sites sparked alarm in our office on Wednesday morning.

Not least because of the subject matter, a reported knife attack the previous evening at a cinema in Rennes, western France, but also because we wondered why we had not heard about the incident. While on the other side of the Atlantic US tabloid The New York Post had the alarming headline: “Multiple injured after movie theater knife attack in France”. The first line of the New York Post's article read: “A crazed man with a knife stabbed moviegoers at a cinema in northern France Tuesday — forcing cops to release tear gas to stop the onslaught, according to reports.”

The Daily Star went with “COPS stormed a cinema in northern France after a knifeman horrifically stabbed several movie-goers.”

The Australian site 9 News also referred to the incident as the “France cinema attack” describing how a “knife-wielding man stabbed a number of movie-goers at a cinema in France.”

But a look at the French press reveals a different story.

It turns out the “attack” was more of a fight (une rixe in French) between two or three men that began outside the cinema and spilled inside. Rather than the police storming the cinema and firing off tear gas “to stop the onslaught”. They used their pepper spray to arrest the man with the knife inside the cinema. Two victims were left with “minor” injuries.

Ouest France newspaper, which originally reported the story, interviewed an employee at the Gaumont Cinema who said: “One of the men was stabbed outside the cinema.

“Then the fight continued inside…. The police were immediately called, and arrived very quickly. The police used tear gas. We took people outside. There was no panic. “

The same employee said that there were not many people around at the time of the brawl as most cinema goers were leaving the movie theatres via other exits.

Calm returned after a short while when cinema goers began to form the usual queues once again, the unnamed employee said.

With France still on alert for terrorism, each incident that appears like it could be the latest jihadist attack is jumped on by British tabloids.

In recent weeks there have been a spate of incidents in France involving “knife attacks”, including one outside our office in Paris which saw seven people stabbed including two British tourists.

But in most of these incidents French police have ruled out or played down any terrorist motive even if Islamic State terror group claimed responsibility for an incident that saw a man stab two members of his family to death.

The problem with the “cinema attack” headlines is not just the fact they wrongly suggest another terror attack has taken place but they will no doubt panic readers and put them off coming to France.