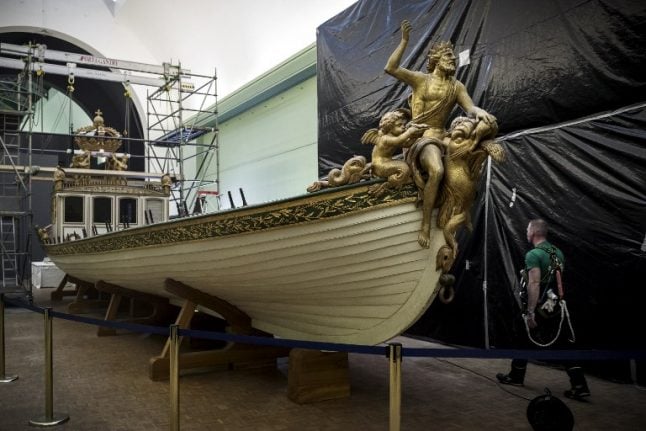 A worker (L) walks past France's Imperial Canoe belonging to Napoleon I. Photo: AFP
Since World War II the 18-metre (60-foot) craft has held pride of place at the National Naval Museum in Paris, its ornate crown topped by a cross and supported by four cherubim perched on the vessels roof.
Using chains attached to scaffolding, workers carefully lifted the crown and placed it on a cross of wooden beams, before slowly depositing it on the floor of the museum, just across the Seine river from the Eiffel Tower.
The imperial canoe, as it is called on the museum's website, is set to undergo a full restoration before going on display in Brest on France's western coast in late 2019. The crown, which makes up part of the France's Imperial Canoe of Napoleon I, is dismantled before being transferred along with the boat to Brittany. Photo: AFP
A huge hole will have to be knocked through one of the museum's outer walls to remove the vessel — the same procedure used to get it inside in 1943 when it was brought from Brest.
“To keep it safe they decided to transfer it to Paris to avoid the bombings” of the port city by Allied forces, Annie Madet-Vache, a museum spokeswoman, told AFPTV.
It was a much simpler version which bore the emperor on his first and only trip aboard, during an 1810 visit to his fleet and his recently built armoury in Antwerp accompanied by a young Empress Marie-Louise.
After his abdication in 1814 the barge was sent to Brest, where his nephew and heir Napoleon III added the crown and other imperial flourishes like the gold statue of Neptune with his trident on the bow